When Jesse Spina was a pre-teen battling Ewing’s Sarcoma, a rare bone cancer, his eye was on a prize bigger than his own struggles: “helping his friends from the hospital.”

He began to hatch ideas to make a difference from his own hospital room, the effects of which are still making ripples today through the Bluffton-based 501 (c)3 nonprofit, Jesse’s Wish Foundation.

Today Jesse would have been in his 30s; his family recently held a birthday party fundraiser celebrating the memory of a life that could have been, and the life that in a sense was, considering the ongoing impact of his desire to help. 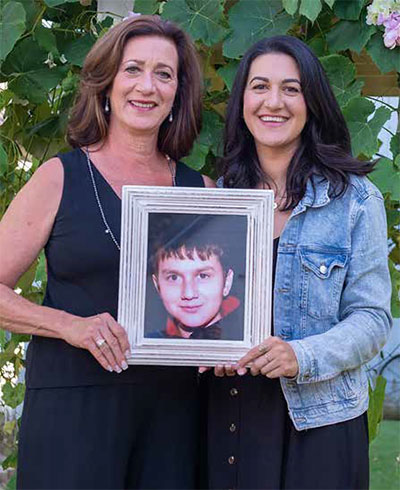 Jesse, his family and his mother Marian Newell, knew well the ripple effects of grace and giving and how “all things work together for good.” It’s what fueled Jesse’s efforts when he started hosting blood and bone marrow drives in his local community to increase donors and multiply the chances of finding a match.

This relational beginning formed a foundation that stands apart through its personal touch.

“We are a small personal foundation,” Newell said. “We don’t give cash; we want to get to know what a child is about, what they like, what makes them happiest, and give them a personal gift.”

To accomplish this, the foundation developed a process of referrals and references for directing resources.

Marian Newell and her daughter Samantha Spina hold a photo of Jesse.

Their website lists ways they gift families, which Newell explains are things most needed by “parents staying overnight with kids in hospitals,” most commonly gift cards like DoorDash, Target and Walmart.

“However,” Newell says, “we want to gift the child something that will make them excited,” like crafts to keep kids engaged with so much downtime, personalized gifts like an Alabama college sweatshirt that gave one child a dream to hold onto, and Firesticks and Disney+ accounts which especially blessed a child in isolation, kept company by a lineup of magic and laughter.

Newell describes these as “whatever a kid needs for a little bit of joy going through such a horrific time in their lives.”

Jesse’s story weaves in and out of the Lowcountry

like a needle and thread; his mother previously lived in Beaufort, and now is back in Bluffton. One beloved local story is also one of the longest running ripple effects of Jesse’s Wish: The survivor story of Stephen Golis, who was with Jesse from the start.

“When Jesse and I were going through cancer together, we were sharing a room, and we would turn the curtains back, put the beds together and play video games,” Golis said.

He speaks of Newell’s work with the foundation as a “God-send to so many.”

Newell returns the sentiment, saying, “there’s an emotional connection — he’s a young man who survived and is giving back for others fighting cancer, remembering his friend Jesse and the impact on his own life.”

One of these ways is a simple coffee can at the Golis Family Jewelers on Fording Island Road, initially placed for Childhood Cancer Awareness Month one September.

Because there were so many donations, Newell says Golis called often to say, “come and get the coffee can.” Soon it changed to, “let’s keep doing this.”

The coffee can still sits in the shop, as does Newell’s book, The Sacred Ripple, a collection of positive stories continuing to grow from that first wish. The book is available for free with a donation of any amount, proceeds of which support the foundation.

“Jesse’s original wish is still creating Divine Appointments, putting us in places where the right people come alongside, because it takes a village to help these kids with cancer and their families,” Newell said “I also let parents know I am available personally to talk to, cry on, and pray with.”

Reverberating through all this is Jesse’s Wish “to help my friends in the hospital,” a wish that keeps wishing, through those who keep giving.

The foundation is committed to “helping individuals and their families in Bluffton, Charleston, Savannah, and Columbia” where Newell’s husband is happy to load their vehicle to deliver large bags filled with toys and crafts to hospitals every other month and local families when needed. They also support where Jesse’s Wish started in New York (personally covered by Jesse’s sister Samantha Spina, the Foundation’s president) as well as hospitals in New Jersey, Delaware, Philadelphia and Virginia, where Jesse’s brother is stationed in the Coast Guard. Said Newell: “We are grateful that Bluffton and the generous people here are now part of Jesse’s Wish.”

For more on the foundation, visit jesseswishfoundation.org.