Collins Group Realty continues to give back to the community.

This community competition began in January with a nomination round, followed by a final voting round for the top-10 nominated charities during the summer.

Once the real estate group closed its 200th home sale of the calendar year, the winners were announced and received a share of $10,000 in cash donations, a news release said.

“Volunteers in Medicine Clinic is incredibly proud to be recognized as the Grand Prize recipient of the Collins Group Realty 200th Home Sale,” said Dr. John Newman, executive director of Volunteers in Medicine Clinic. “Thanks to Collins Group for adding fuel to the fire to care for the medically under-served patients and families who live or work on Hilton Head and Daufuskie. Special thanks to creating the awareness to the awesome not-for-profit work going on in our community and special kudos for making it fun.”

Founded in 1993 by Dr. Jack McConnell, Volunteers in Medicine now has 22 full-time equivalent employees who operate the clinic with the help of more than 650 retired and professional volunteers. As a team, the clinic staff and volunteers see more than 10,000 patients annually over 27,000 patient visits, a news release said. 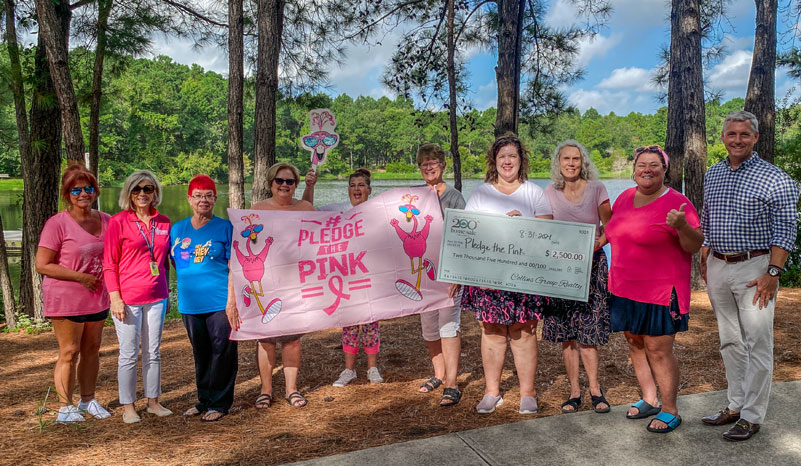 Pledge the Pink was awarded second place. The local charity race, which was founded in 2011, is aimed at fighting breast cancer in South Carolina. In the nonprofit’s first 10 years it donated over $1 million to help provide gap funding for nonprofit service providers across the nation. The next event on Hilton Head Island is Oct 14-17.

Hospice Care of the Lowcountry, the only nonprofit hospice care in the Lowcountry, placed fourth. It offers comfort and dignity for end-of-life patients and their families.

Placing fifth was Turtle Trackers of Hilton Head. The group of volunteers assists with the preservation efforts for endangered sea turtles nesting on Hilton Head Island and educates the public for the protection of our sea turtle hatchlings heading to the ocean.

“We’re really excited for this second year of the 200th Home Sale,” said Chip Collins, owner and broker-in-charge of Collins Group Realty. “We’ve been blessed with good business, so each year when we hit the 200th closing milestone, it’s nice to reward the community.”

Overall, 113 nonprofits were nominated and participated in the program sponsored by Collins Group Realty’s Community Results Project, a fund of Community Foundation of the Lowcountry.

“We are honored by the participation of so many through nominations, spreading the word, and finally voting, and so pleased to visit with and present donations to the top five winners,” Collins said.

In addition to giving back to the community, one of the goals of the 200th Home Sale for Charity is to spread awareness and educate the community about the nonprofits in the Lowcountry.