Established as a National Heritage Area in 2006 by the U.S. Congress, the Corridor recognizes and preserves the cultural treasures of the Gullah Geechee people, direct descendants of enslaved individuals brought to work on plantations.

Smalls’ enthusiasm and ambitions have deep roots. Growing up on St. Helena Island during the 1960s, Smalls was one of 14 siblings in a blended, bi-racial family. Her white mother, a widow from Michigan with four children, married a Gullah widower with six children. Together, they had four more children, including Victoria. 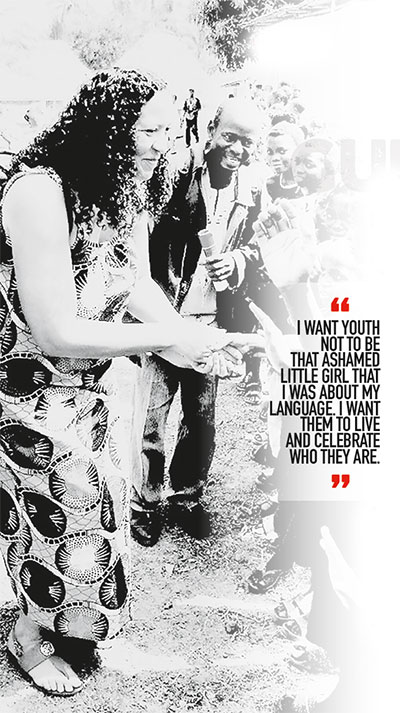 Embraced by the island community, Smalls’ family learned to, as she says, “work da land” and “lib off da wada.” Harvesting okra and sweet potatoes, as well as cleaning fish and speaking Gullah were as natural as breathing.

At 9, though, while walking in Beaufort, Smalls heard laughter when she spoke. “I was made to feel ashamed,” she says.

Smalls stopped speaking in public and started listening to Barbara Walters and Walter Cronkite, mimicking their speech. She perfected her English but also developed a stutter for a period.

“I want youth not to be that ashamed little girl that I was about my language. I want them to live and celebrate who they are,” she asserts.

Generating interest and respect for the Gullah language is just one of her goals. So, too, is educating about the knowledge of rice cultivation brought here from West Africa, preserving traditional art forms, and supporting Gullah businesses.

The challenges before her are many. Although her official office is on Johns Island, Smalls supervises a National Heritage Area that stretches from the coast to about 30 miles inland from Wilmington, North Carolina to St. Augustine, Florida.

A typical work week might entail fielding concerns from Gullah residents on Hilton Head Island about the possible loss of family lands related to the reconfiguration of U.S. 278 to visiting small towns in Georgia, where Gullah artists want to attract a larger audience. Museums might call for advice or schools for enrichment programs. No request is ignored.

“It’s important to go out into the com
munities to know what their needs are and how we can support them,” says Smalls, who lives on St. Helena Island. “Thankfully, I have great support.”

To help facilitate the goals of the Corridor, Congress in 2007 established a 15-member Gullah Geechee Commission that works closely with Smalls.

“You cannot do anything alone,” she says, grateful for all the “tools” she has gathered on her way to becoming executive director.

“I work for the ancestors,” she adds, acknowledging that her parents as well as all the ancestors collectively have guided her path.

Starting out as an early childhood educator, Smalls taught at Lady’s Island Elementary, an arts-infused school, where she saw firsthand the benefits of incorporating arts and culture in schools.

Significant time at the Red Piano Too, an art gallery on St. Helena Island, connected her with Gullah creatives and what compels them to make art — something that resonates with Smalls, an artist herself, who works in pastels and oils. Her iconic portraits — all peaceful faces with eyes closed — hang in collectors’ homes across the country.

But it was working at Penn Center, formerly the first school for enslaved individuals and now a significant historical institution, that taught her how to be a strategic planner and cultural preservationist.

Becoming a National Parks Ranger for 10 months was simply icing on her resume.

“I was an interpretive ranger,” she says, admitting that she loved telling the story of her people through walking tours and school programs and had no intentions of leaving.

But when asked to lead the Corridor, she suddenly blurted, “Yes.”

“I really want to bring success and upliftment to the Corridor and its people,” she smiles.

No doubt the ancestors are smiling, too.