The youngest of 11 children from a working class family in Northern Virginia, Shannon Stratton started putting herself through community college at age 18. She was among the first in her family to pursue higher education. “I was working as an administrative assistant and going to school at night,” she said.

Despite her best efforts, life got in the way and she dropped out. Stratton went on to become a highly successful business owner, but she always wished she had earned her degree.

“Once I got into sales and started making money, I decided not to pursue school,” she said. “But it always bothered me. It was a nagging thing. I wasn’t embarrassed, because I’m not ashamed of where I came from, but it was a personal goal. I wanted a degree.” 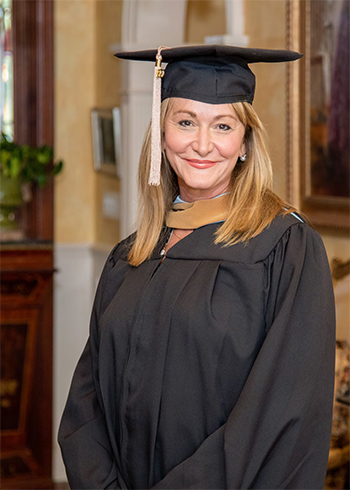 This summer, more than 30 years after she left school, Stratton achieved her goal in a big way by earning a master’s in business administration from the University of North Carolina- Chapel Hill.

The journey that culminated in this advanced degree started with a program at the University of South Carolina designed for working professionals.

By attending classes in the evenings and all day on Saturdays, Stratton completed her bachelor’s degree while working full time. The pace was exhausting and “no one in my life except my husband and children knew I was going to school,” she said.

“My husband would tell people I was out shopping. I shopped a lot for two years. I drove to Columbia, Beaufort and USCB in Bluffton, and I was often in class with students who were younger than my son,” she said.

Stratton said she couldn’t have earned her bachelor’s degree without the support of her husband, Dan, who “really sacrificed.”

Stratton achieved her goal in a big way by earning a master’s in business administration.

“I can’t thank my husband enough,” she said. “We were running a business together, my daughter was in middle school, and one of my best friends was succumbing to breast cancer. I had to study and work on group projects which took a lot of my time. He really accommodated me.”

The couple met in 1987 and moved from Washington, D.C., to Hilton Head Island in 1992. They still work at the business they started together, Stratton Securities, which finances capital equipment for federal government contracts. Daughter Rachel, 17, who graduated from Hilton Head Prep this spring, will head to Clemson University this month and adult sons Cameron, Jeff, and Steve all went to college.

“He was bursting at the seams to tell everyone,” she said. “But he also said, ‘When you apply to get your master’s, you may as well apply for divorce, because I’m not going through that again.’”

Marriage, some say, is nothing but one long opportunity to eat one’s words: In December 2017, a year after Stratton graduated from USC, Dan gave her a laptop for Christmas. Inside was a card that read, “Go get your master’s. I know that’s what you really want.” 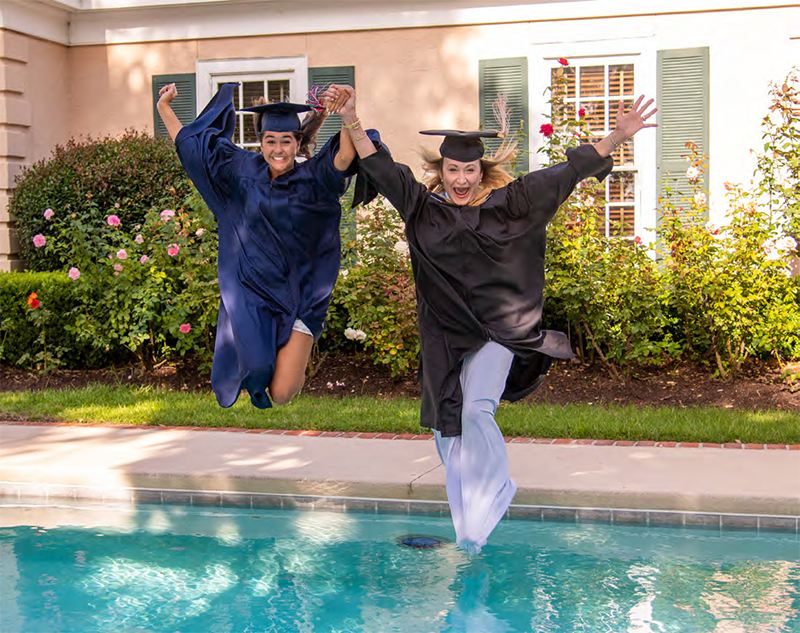 She set her sights on the MBA program at the Kenan-Flagler Business School at the University of North Carolina-Chapel Hill — ranked one of the top 20 in the country. But its reputation wasn’t the only thing that drew Stratton to it; she also appreciated its coursework that combined online and in-person instruction.

“UNC recognized that technology was the future of education before any of the other universities,” she said. “They were already using Zoom.”

Although Stratton worried she wouldn’t be accepted into the selective program, “UNC wanted me because I brought diversity to their program,” she said. “They said, ‘You have over 20 years of business experience. That brings a lot to the table.’”

She attended live classes via computer and every six weeks traveled summits with classmates in Chapel Hill, London, New York and Chicago.

“You get the benefit of human interaction and business networking with the convenience of doing much of it from home. It’s geared to executives who can’t just take off work,” she said. “It was incredibly humbling. I was keeping company with a lot of really brilliant people.”

Stratton didn’t attend her 2016 USC graduation ceremony because her friend passed away the day before the ceremony.

She eagerly anticipated walking across the stage to accept her diploma in May at UNC’s graduation ceremony. Unfortunately, like many other schools, UNC was forced to cancel its commencement due to the coronavirus pandemic.

Her master’s diploma was sent to her in the mail, but that didn’t dampen her excitement. Holding it for the first time, Stratton said, “was a tremendous feeling of success.”