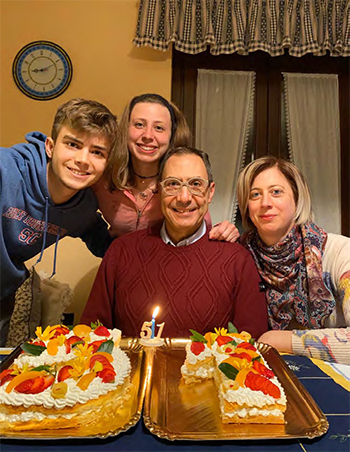 FIRSTHAND EXPERIENCE OF COVID-19 IN ITALY SHOWS LIFE GOES ON

I’m an 18-year-old junior at Bluffton High School. But since September, I’ve been living and studying in Sicily, Italy, as part of a Rotary Club exchange program. What started out as the trip of a lifetime became one of the most intense experiences of my life thanks to the spread of the novel coronavirus.

Here is my firsthand look at how Italy — one of the countries hardest hit by the COVID-19 virus — responded to pandemic, and what it could mean for America.

The first six months of my experience were optimal: I attended school, learned the language, made friends and bonded with my host family. When the pandemic hit, the government responded promptly, originally instituting a quarantine in the affected northern areas, and later expanding the quarantine to include the entire country. That meant travel restrictions that forbade us from leaving the house except to buy food or medicine, enforced by a 200 euro fine — so most people followed the orders.

What started out as the trip of a lifetime became one of the most intense experiences of my life.

To pass the time indoors, my host family and I turned to some of the most basic forms of entertainment: reading and actually engaging each other in conversation. This gave me a chance to really get to know my host parents, Loredana and Vito, as well as my host sister, Olga, who was studying at university in Rome but came home when the quarantine order was issued. Other things that helped me avoid going completely stir crazy were video games, exercise and attempting to absorb as much culinary knowledge as possible from Loredana.

During this time, I also decided to keep a journal to document the experience and have included a few entries here:

Today is the first day of quarantine, and also the first day of online classes for my school. While it took my teachers a little while to get their video cameras and microphones in working order, we eventually were able to engage in some sort of conversation that could be generously described as a “lesson.” After my morning classes, I helped my host mother make a tiramisu, a traditional Italian coffee cake. This consisted mainly of her cooking and me writing down the recipe to use upon my return to the U.S. Between lunch and dinner, I spent my time reading and exercising in our basement gym. For dinner, we had an amazing homemade pizza followed by the tiramisu that my host mother had prepared earlier that day as I watched attentively.

Today is my host father’s birthday. Sadly, I started the day with more video lessons and was not able to help my host mother bake the cake. For lunch, we had salmon, and the scraps were fed to the pregnant cat that visits us daily in the hopes of a delicious snack. I like to think the cat and I have formed a bond, but deep down I know I am being manipulated for food.

I spent the rest of the day reading until our celebratory dinner in honor of host dad’s birthday.

Because today was Sunday, I was allowed the luxury of sleeping in. I woke up just in time for lunch, which was a traditional Italian dish: pasta al forno. After lunch, I spent the early afternoon playing the video game Just Dance with my host sister. This was extremely exhausting, so I decided to skip my usual exercise in favor of accompanying my host dad to the grocery store. At the grocery store, the employees and the few customers in the store were equipped with masks and gloves in true zombie apocalypse fashion. We were able to find the majority of the items on our shopping list; however, some items were out of stock as they had sold out during the panic of the first days of the quarantine.

This is all I have for now, as I have been very busy with online school. I hope this has served to give you an idea of what life is like in quarantine in a country strongly affected by COVID-19.