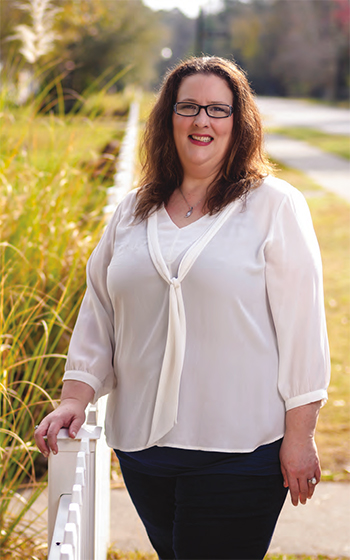 Heather Price imagined an online coffee shop where people could ask questions about life in the Lowcountry and get answers. She ended up with a gathering in a virtual arena the size of a small stadium.

Price is the creator and chief administrator of “Bluffton/Hilton Head Ask and Answer [Original],” a Facebook group that has more than 21,000 members — many of them very active.

A Lowcountry resident since 1984, Price attended Hilton Head Island High School, has a bachelor’s degree in human services from the University of South Carolina Beaufort, is trained as an EMT and worked for the Jasper County Emergency Services Department. During her time there, she developed a sympathetic, strong voice and the ability to stay calm during stressful situations.

“Emergency management helped me anticipate what was going to happen next,” she said.

Price, who lives near Old Town Bluffton, first got the idea for a Facebook group for questions when she saw members of another online group criticize a woman who asked about a spider on a local page dedicated to buying and selling used items.

“She responded that she was a military wife with a baby at home and her husband was deployed,” Price recalled. “She had just moved here and didn’t know anyone.”

Bluffton/Hilton Head Ask and Answer [Original], a Facebook group, has more than 21,000 members.

Price envisioned a supportive online space where people could get their questions answered, find out local news and connect with the community — a type of online community board. In 2015, when her daughter Charlotte was 6 months old, she stared “Bluffton/Hilton Head Ask and Answer.” In the beginning, she did most of the asking and all of the answering.

The page grew steadily, then took off when Hurricane Matthew threatened. In one week, Price added 1,000 people to the group.

“I stayed, and through a friend’s job got onto Hilton Head Island to go live on Facebook for the first time,” she said. “People asked me to check on their houses and I did. We rescued animals. Someone asked me to go get her breast milk and I did.”

After the hurricane, needs started pouring in. People were out of work and had spent money evacuating. Many had never needed assistance before and didn’t know where to turn. Price asked group members to help with Christmas presents, homelessness and hunger.

“Of course, we refer to local nonprofits. But many make too much on paper to qualify for help. And things happen outside business hours. I have found that the page fills gaps,” Price said.

Recently, she was able to help a victim of domestic violence escape a dangerous situation. But not all the needs are as dire: when a Bluffton woman left her flip-flops at the beach and posted about it, another group member responded that she was just pulling into the parking lot and would pick them up. On a recent day, the page was aflutter about lost pets, a tennis group seeking members, recommendations for photographers for engagement photos and a pop-up face painting booth at DuBois Park. Through the page, Price organized a buddy system for Thanksgiving and Christmas meals and hurricane evacuations.

Of course, members also air their grievances online. Price and her current group of six administrators have adopted rules including no bullying, no major profanity and no selling anything. If members break the rules, administrators block their ability to comment temporarily or permanently. She added the word “original” to the group’s name after several copy-cats sprung up.

After the hurricane, needs started pouring in. People were out of work and had spent money evacuating. Many had never needed assistance before and didn’t know where to turn.

Price works up to 50 hours a week on the site, in small bits of time between her duties as a single mom (she also has an adult son, Nicholas) and cleaning houses for income. In the back of her mind is the mission that when tragedy hits, she wants to make sure locals are surrounded by love. Price and her then-fiancé lost their 6-week-old daughter, Vivienne, to SIDS in 2013. She remembers that after the ambulance and police left their house, they had to drive themselves to Hilton Head Hospital to see if their daughter was still alive. Help for dark times came later when they joined a pregnancy and infant loss support group run by Hospice Care of the Lowcountry, from the nonprofit Harper Project, and from a meal train organized by members of Hilton Head Hospital’s “The Boob Group” Facebook group.

Bluffton/Hilton Head Ask and Answer has responded to loss in the community as well.

“When people are hurting, I post, “Let’s love on them,” Price said. “And our members do.”