When Cynthia and George Gorski-Popiel moved to Hilton Head Island a little more than 20 years ago from the Washington, D.C. area, they knew they would find golf courses and tennis courts, but they weren’t sure what kind of cultural life would be available.

At lunch at a local restaurant shortly after moving to the island, Cynthia, a pianist, tried out a piano the restaurant had for sale by playing a Mozart sonata, and was surprised by applause from a nearby table. As it turns out, her audience included members of the board of the Hilton Head Orchestra.

“I had no clue they were there, but that turned out to be the beginning of our involvement in the wonderful music on this island,” she said. The board members told the Gorski-Popiels about classical music on the island including Hilton Head International Piano Competition to the Hilton Head Symphony Orchestra and a group called Low Key Piano.

Their introduction to the International Piano Competition turned into an ongoing commitment. The Gorski-Popiels have hosted young competitors or judges in their home nearly every year and all those competitors now seem like part of their extended family.

“People think that having these young people in their homes for 10 days is quite a lot to take on, but the time flies and you build wonderful relationships,” Cynthia said. “Last year we hosted a pianist from Poland, which is where George is from, and it was the first time we’ve had a finalist.” 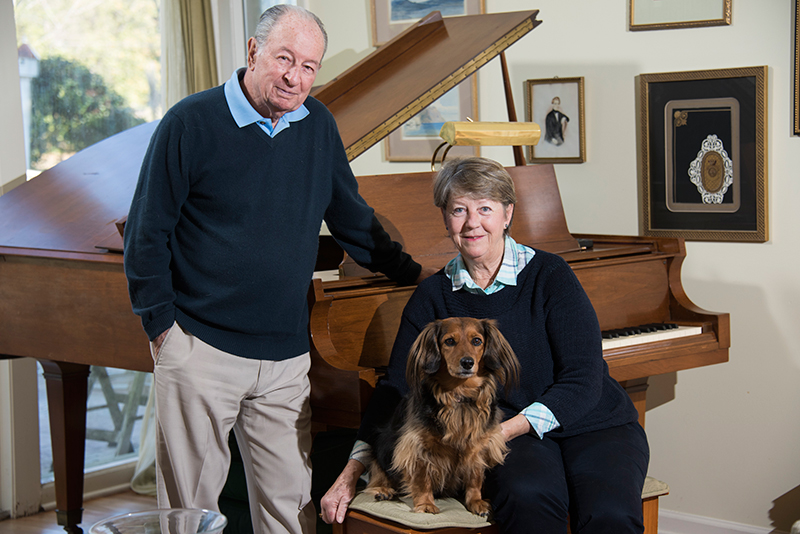 Several years ago, Geneva Griz asked Cynthia to join the board of The Performing Arts Consortium (TPAC), an organization Griz started in 2008 to support young classical musicians at critical points in their careers. When Griz retired as president three years ago, board members asked Gorski-Popiel to take on the role. After some reluctance, her passion for promoting classical music won out and she agreed.

The organization has helped in many ways, including buying a clarinet for an up-and-coming performer to underwriting a concert at Carnegie Hall for a pianist facing deportation unless he proved his value as a musician.

“We’ve helped young musicians from all over the world,” says Gorski-Popiel.

This year, Gorski-Popiel was excited to expand the consortium’s visibility and give a gift to the community by bringing one of its unique recipients - The Concert Truck - to Hilton Head Island on the opening day of Crescendo, the island’s monthlong celebration of the arts. The Concert Truck is a mobile venue that brings classical music out of stuffy concert halls and into unexpected spots ranging from curbsides to school yards.

This month, TPAC’s annual benefit honors the memory of founding board member Robert (Bob) Rada, a former chairman of the Hilton Head Symphony Orchestra board, trombonist in the orchestra as well as a former trombonist with the Chicago Symphony. Rada also was one of the founders of the island’s Concours d’Elegance.

Ukranian pianist Dasha Bukhartseva and cellist Marcel Krasner will perform. When she was only 13, Bukhartseva was discovered by Mieke and Hendrik Smit, longtime TPAC supporters who heard her play and arranged to bring her to the U.S. With others, they helped her finish high school at Juillard, earn a bachelor’s degree at Peabody and a master’s degree at the University of Miami. She is finishing her doctorate at Stony Brook University.

Bob Rada, who was good friends and neighbors with the Smits, knew Dasha and watched her grow professionally.

The concert is at 7 p.m. Feb. 4 at Tidepointe, 700 Tidepointe Way on Hilton Head Island. Tickets are $50 and include champagne and desserts sponsored by TidePointe. For more information, go to www.theperformingartsconsortium.org.