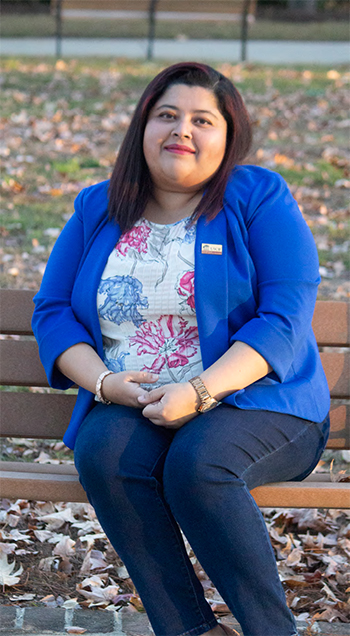 “When people from India think of the United States, they picture New York and L.A., but when I describe the Lowcountry I like to say it’s more like ‘The Notebook,’ with the Spanish moss and everything,” said Swati DebRoy with a laugh. A native of Kolkata, India, her new home is a world apart.

Her childhood in the so-called City of Joy was a happy one; her parents raised her to think critically and she learned to prize the scientific method while in college. Afterward, she said, she knew she wanted to earn her Ph.D. in America — but didn’t know what to expect when she landed in Gainesville in 2007 to study mathematical biology at the University of Florida.

“The streets were so clean,” she said. “It struck me as a dollhouse. In a way, I felt like I was walking inside an HBO movie. Everything I saw in the screen, I was seeing now, touching it, smelling it.”

In a way, I felt like I was walking inside an HBO movie.

Thanks to a tight-knit Indian community and an established support system at the university, she quickly found her footing. When she began learning the tools of mathematical modeling, “I knew this was meant for me,” she said, and was particularly thrilled to work on emerging research pushing for a better cure for hepatitis C — a treatment whose success in a patient could be measured by doctors within weeks instead of years.

After leaving the Sunshine State, DebRoy found herself in Kansas City, but after slipping on black ice and breaking her leg, requiring a steel rod implant, she knew it wasn’t for her. She began applying to teach at colleges across the Sunbelt. Eventually, seven months pregnant with her son and with winter fast approaching, she landed a position at the University of South Carolina Beaufort, where she was excited to find an embracing spirit.

Though she relished the Lowcountry’s natural beauty and temperate weather, her first year was a struggle. When professors aren’t teaching, they’re expected to volunteer while also producing research. Holding herself to high standards while giving her son the childhood she envisioned seemed impossible.

“I didn’t know to ask for help. That semester was the most challenging time in my life,” she said. “But once I started opening up and asking for help, everyone was more than supportive. It took a lot of weight off my chest.”

When a public health professor caught wind of DebRoy’s expertise, it led her to discover a new side of the Lowcountry.

“He was like, ‘You’re a modeler, here’s a bunch of data on obesity I’ve been collecting in the surrounding counties. See what you can do!’” DebRoy said.

She plotted out the data and immediately started noticing trends in demographics. Eventually, she presented her research to the school boards of Beaufort and Jasper counties, which led to even more studies on health disparities among minorities. It was an eye-opener.

For most of her career, she had worked with “nicely gift-wrapped data,” she said. Now she found herself collecting data in person at middle schools in some of the Lowcountry’s more impoverished areas, discovering that even a supposedly wealthy country like America could experience such income inequality.

“That was life-changing for me,” she said.

DebRoy was surprised to find that poor populations were more likely to be obese in the U.S., because this isn’t the case in India. And while that’s still a challenge facing the U.S. today, she is working with USCB students across disciplines to create educational materials on health and good diet choices for area students.