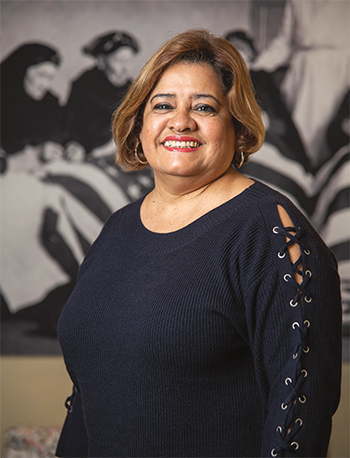 When Mayra Rivera-Vázquez’s husband started looking for jobs in the U.S. as a federal employee, she had one requirement: the new assignment had to be near the East Coast, so she could look at the ocean and know that it connected her with her home in Puerto Rico.

“I needed that,” she said. “To know we’re joined by the same water.”

The family moved to Bluffton six years ago when he accepted a position in the Lowcountry. Rivera-Vázquez fought homesickness and made friends in a surprising way: by diving into politics in her new homeland. Last year, she became the chairwoman of Beaufort County’s Democratic Party and the first Latina chairwoman at the South Carolina Democratic Party. In 2018, she replaced longtime party leader Blaine Lotz by unanimous vote.

Rivera-Vázquez, who was born in Puerto Rico and grew up in the small city of Caguas, isn’t new to politics. She was an active member of the Democratic Popular Party in her home country, which is comparable to the Democratic Party in the U.S., and the co-founder of the Sovereign Union Movement.

I hope that we get more Hispanics involved in the election process.

“All of my family has always been involved in politics,” she said. “I remember being 7 or 8 years old and painting flags in my backyard.”

Puerto Ricans are U.S. citizens, but their voting rights, like the voting rights of residents of other U.S. territories, differ from those of U.S. citizens who live in the 50 states and the District of Columbia. Residents of Puerto Rico and other U.S. territories do not have voting representation in the United States Congress or electoral votes for president.

Rivera-Vázquez has voted in every federal, state and local election since she moved to the Lowcountry.

Her first major role in politics was as county deputy commissioner of her county in Puerto Rico. She also was sub-secretary of the Puerto Rico State election committee commission. She was a community organizer and a member of her city’s community affairs advisory board, and also held leadership roles related to housing, vocational and technical education, labor and economic development. And she did all this as a volunteer; professionally, Rivera worked as a compliance officer in a bank for community investment. Rivera has a law degree from the University of Puerto Rico Law School and a master’s degree in international law from the Institute of Law and Economy in Madrid.

Despite her achievements, her family — including husband Ricardo Colón, who works in IT at Marine Corps Recruit Depot Parris Island; 26-year-old daughter Nicole; and son Ricardo Jr.— has always been her priority. When she first moved to the U.S., her focus was on helping her son, who has autism and is nonverbal, get settled in his new surroundings. He had never been in a public school or on a school bus, and Rivera-Vázquez and her husband feared he wouldn’t adapt.

But the family was “blessed to find incredible services at Hilton Head High” and a special teacher in Janice Robinson, she said.

With her son happy at school, Rivera-Vázquez was free to get involved in the community and in politics. The first time she attended a meeting of the local Democratic Party, she remembered, it was at the Unitarian Universalist Church in Bluffton and her husband commented that it took a real extrovert to go alone, knowing no one there.

“I was a little late and the door really squeaked when I came in,” she said. “Everybody turned around and looked at me.”

But Rivera-Vázquez’s bubbly personality soon won her friends in the group, and she has been active with the Beaufort County Democratic Party since 2015, volunteering with elections, heading fundraising efforts and motivating people to vote and run for office.

“I hope that we get more Hispanics involved in the election process either by running for a position, getting registered or getting out to vote,” she said.

Rivera-Vázquez worked hard to help Joe Cunningham get elected to the U.S. House of Representatives, and this year has been at the forefront of organizing campaign visits by Democratic hopefuls Julian Castro, Cory Booker, Pete Buttigieg, Elizabeth Warren, Andrew Yang, Beto O’Rourke and Kamala Harris.

The role of party chair is a volunteer position, and Rivera-Vázquez has to juggle its responsibilities with her full-time work as a legal assistant at Deverall Immigration Law in Bluffton, where she helps people from around the world navigate the complicated U.S. immigration system. She’s also a member of the Lowcountry Immigration Coalition and is on the board of directors for Hilton Head Regional Habitat for Humanity.