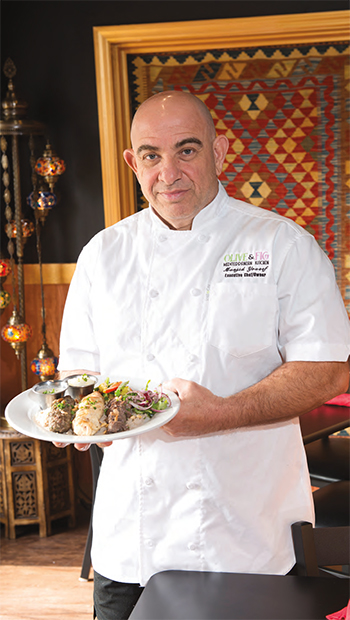 Tracking Munjid Yousif’s background is a bit like sampling the menu at his restaurant, Olive & Fig Mediterranean Kitchen, where he crafts his dishes around the flavors of Lebanese and Greek cuisine. But just like his Lebanese heritage, there’s more to both the chef and the menu than meets the eye.

Actually, Yousif wasn’t even born in Lebanon — but then, nationality is more than a place, he said. Growing up in Kuwait as the son of Lebanese parents, he experienced Lebanese culture even if he was geographically removed from its source. His parents taught him everything he needed to know about being Lebanese.

“It’s a different culture. Over there, it’s more parental attachment, especially if you’re in a foreign country,” he said.

I’m very passionate. I still practice my culture’s food no matter what.

One of seven children in an upper middle-class family, Yousif grew up in a pocket of familiar Lebanese culture amid a transformative period in Kuwait’s history: “It was a modern country,” he said of Kuwait, adding that it has grown since he left. “We never bumped into poverty in Kuwait. We were on the good side. There is poverty, but it’s not that bad. It’s more a protected country. … They don’t allow poverty.”

His love of Lebanese cuisine would eventually carry him from Kuwait to the Royal Academy of Culinary Arts in London. You would think the transition from Kuwait to London would be shocking, but Yousif took it all in stride.

“I don’t think it was a challenge — it was fun,” he said. “We entered the school and started studying.”

After graduating, Yousif returned to Kuwait and served as a sky chef for Kuwait Airways, crisscrossing the globe for eight years as he sampled cuisines and cultures from around the world.

“I’m used to multiple cultures because I used to travel and be around people and get many ideas,” he said. “I used to go to far eastern Asia, so I know how the Filipinos live, how the Thai live, Europe, France Spain…”

His international horizons expanded once again when he was accepted into the prestigious hospitality school Ecole Hôtelière de Lausanne in Switzerland. This served as his introduction to the wider world of hospitality food service, which would take him from Sheraton Kuwait, a Luxury Collection Hotel, Kuwait City, to Hilton Abu Dhabi Corniche (now a Radisson property). It was here, in the wealthiest region in the Middle East, that Yousif began to see the strife developing throughout the region, when the first Gulf War began.

“We chose to not stay. At that time, I was newly married and didn’t want to take the risk of staying there. We didn’t know what was going to happen,” he said. “When they start landing the U.S. military in all the ports of Dubai, you began to say, ‘Hold on, what’s going on?’ You never know. Things can erupt any time in the Middle East, unfortunately.”

With the American military apparatus heading into Kuwait, Yousif made his way west to Canada, where he enjoyed landed immigrant status. He split his time between The Ritz-Carlton Montreal, helping other restaurateurs spread Lebanese cuisine, and surviving the cold.

“Canada was a disaster, a little bit, from the weather side. Although I had lived in Europe, I’d never seen such cold,” he said. “By the second year, it was like, ‘OK, when am I leaving?’”

When the opportunity came to help build a hotel franchise in Charlotte, Yousif jumped at the chance. He passed his citizenship test and became an American nine years ago.

“Being considered a Canadian national, not a Middle Eastern national, made it way easier,” he said.

It was in Charlotte that he met his wife, Tammy, and shortly afterward the pair set their sights on Hilton Head Island: “It wasn’t hard to leave Charlotte for Hilton Head. Overall, Hilton Head and Bluffton have made our lives easier… We meet people from all over the world here.”

From Kuwait to London to Switzerland and now the Lowcountry, one thing has remained with Yousif despite all his travels.

“Being Lebanese, I’m proud of what we do here (at the restaurant). I’m very passionate,” he said. “I still practice my culture’s food no matter what. No matter where I went, I carried it with me.”