People have always told Sally Murphy that she should write a memoir.

After all, as a biologist and environmentalist with South Carolina’s Department of Natural Resources, she spent three decades getting a lot closer to the endangered species than most people. She was among the first to document threats — like shrimp nets — to the state’s turtles, and successfully advocated for mandatory turtle excluder devices that helped them escape the nets.

After she retired, Murphy decided to share her story and the lessons she learned over the years about protecting the environment. The result: “Turning the Tide,” a memoir she published in December.

“It was a great thing to do, reminiscing with my relatives and other friends about things that have happened,” she said of writing the book. “It was fun.”

IF I CAN WRITE A MEMOIR, ANYONE CAN. 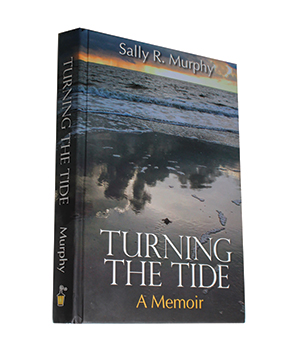 Filled with stories that are both funny and sad, “Turning the Tide” describes her personal and professional triumphs against tough odds. It all began with a transfer to Charleston, where she began her career as the state’s sea turtle coordinator. Over the years, she created South Carolina’s turtle conservancy program as it exists today, including its volunteer nest protection projects and its sea turtle and marine mammal stranding networks.

Her memoir also includes anecdotes about her days monitoring the area’s sea turtle population from a single-engine plane flying low along the shoreline and confronting humans poaching on the beach. A man known as “Ronnie the Poacher” gave up his illegal ways, she wrote, when his fine when from $25 to $5,000 after loggerhead sea turtles were classified as a threatened species.

Murphy also shares personal stories, like her childhood spent on the Vernon River, south of Savannah.

“I sometimes pretended to be an otter,” she wrote, “sliding on my belly down the pluff mud shore at low tide, or as I floated on a rubber raft along narrow creeks.”

Though she said she enjoyed the writing process, the task at first seemed daunting. For guidance, Murphy enrolled in a memoir-writing workshop, where her instructor helped her add more description to her work by encouraging her to “write” with all of her senses, not just focusing on what she saw and heard. Her publisher, Evening Post Books in Charleston, is keeping Murphy busy with signings, speaking engagements and other appearances, but Murphy is encouraging to those who have been thinking about writing their own life stories.

“If I can write a memoir, anyone can,” she said.

“Turning the Tide” is available in local bookstores as well as amazon.com.