LOCAL ARTISTS SAY AREA COULD DO MORE TO SUPPORT CREATIVITY

Candace Lovely has painted at some pretty impressive addresses — like the First Lady’s Garden, 1600 Pennsylvania Ave. in Washington, D.C.

The nationally recognized Impressionist painter was commissioned by Barbara Bush to create her official portrait at the White House during George H.W. Bush’s presidency.

But despite her successes, Lovely recently turned to the community for help when she fell on hard time— and says her situation is an example of the struggle facing artists in Hilton Head Island and Bluffton who are trying to make a living. 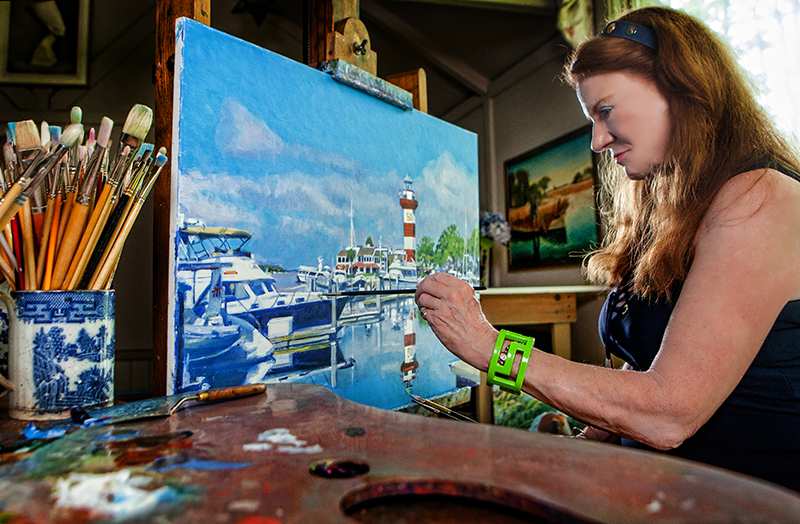 Lovely moved with her parents from Vermont to Hilton Head in the 1970s, settling in a home that her dad built for her mother in Hilton Head Plantation. Today, the prolific painter works at home in her late mother’s studio. Her paintings range from windswept beachfronts to garden scenes to works that document years of experiences in the Lowcountry. This spring, she won first place at South Carolina Chapter National Association of Women Artists exhibit for her oil on linen painting titled “Venus Goes H2O.”

Over the years she has taught art, authored and sold coloring books, and led art workshops. Her financial troubles started in the early 2000s when her husband, mother and grandmother died. Lonely and grieving, she fell into a marriage with another artist who ran through her finances. When the market crashed in 2008, people stopped buying art and Lovely struggled to make the minimum payments on her home. The market for investment commissioned pieces has not recovered, and after holding on as long as she could, Lovely recently received a foreclosure notice that evicts her in September. 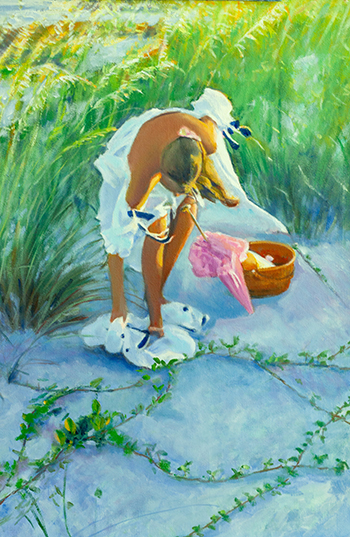 “People always say that I’m talented and that they love my work, but they can’t afford it,” she said.

Lovely, who is 66, decided to go public with her plight on Facebook, her website (candacelovely.com) and through an e-blast to the media and others. A GoFundMe page (gofundme.com/save-the-art-family-home) is raising money to save her home and studio. For a $200 donation, she’s signing a giclee reproduction of her painting “The Edge,” which depicts the northernmost point of Hilton Head. If she makes her fundraising goal, she’ll donate the original painting, currently housed at the Arts Center of Coastal Carolina, to the Town of Hilton Head Island.

She’s also drastically cut the price of her artwork by 70 percent, well under its appraised value. The work is for sale on her website, candacelovely.com.

Lovely is the latest, but not the only, professional artist to bring attention to the difficulties artists face in the Lowcountry. Sculpture Kevin Eichner, who won this year’s Purchase Prize at the biannual Public Art exhibition by Community Foundation of the Lowcountry, has also been vocal. Soon after the of Town of Hilton Head purchased Eichner’s 10-foot-high“Humanus” sculpture and made plans to install it at the entrance to Hilton Head Island Airport, Eichner announced that he and his partner, artist Sonia Landwehr Hunt, were moving to North Carolina because the state offers more support for the arts. 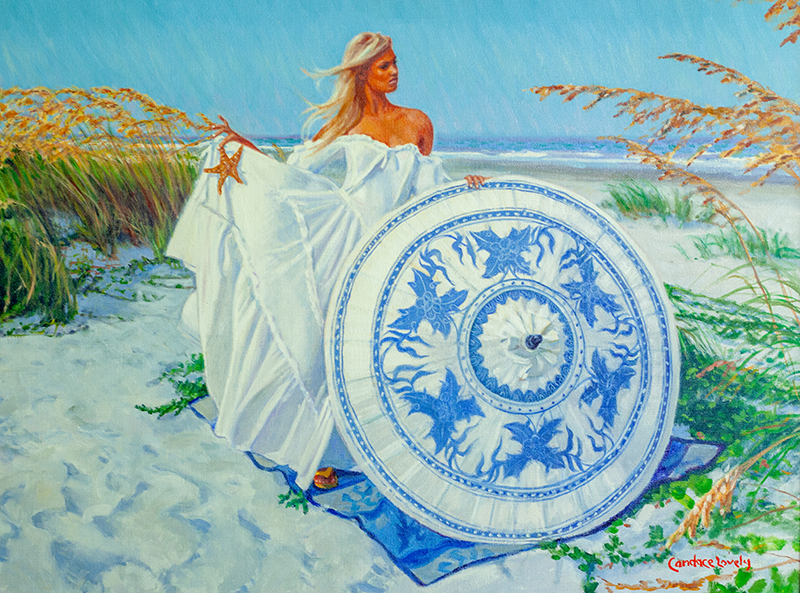 To try to foster the cultural and artistic scene on Hilton Head, the town in 2017 created the Office of Cultural Affairs and hired Jenn McEwen as director. She is heading marketing efforts to promote the island’s creative talent.

“I work with local organizations to advertise the depths of what we have to offer on Hilton Head,” she said.

ESTABLISHING AN ARTS DISTRICT FROM THE CROSS ISLAND TO SEA PINES CIRCLE, PALMETTO BAY ROAD TO ARROW ROAD AND GIVING IT A DIFFERENT LAND MANAGEMENT ORDINANCE WOULD HELP. 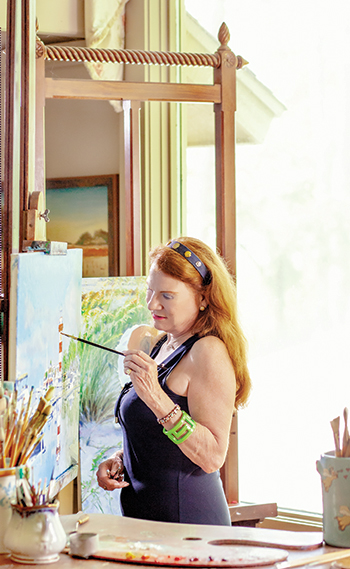 McEwen believes in creating opportunities to showcase art, history and culture to boost public participation. So far, her office has launched a website, CultureHHI.com, to promote events and attractions. Any artist can make a landing page there for free, and the site includes a master calendar linking to arts events. The office also produced a cultural trail map linking assets like public art and historical sites.

Getting more of the island’s visitors to purchase art is one of Mira Scott’s goals. Scott is a board member of the Arts and Cultural Council of Hilton Head and the co-founder of the new artists’ collaborative space called Bo Art. She would like to see the area around Dunnagans Alley on the south end of Hilton Head, where Bo Art is located, become a walkable destination for art and culture.

“Establishing an arts district from the Cross Island to Sea Pines Circle, Palmetto Bay Road to Arrow Road and giving it a different Land Management Ordinance would help,” Scott said. “If it was supported by the town, we could have walking paths throughout this whole district, which would make it easy for someone to park or catch a trolley, get to the area and have dining, shopping and visual experiences. This would definitely help local artists”. 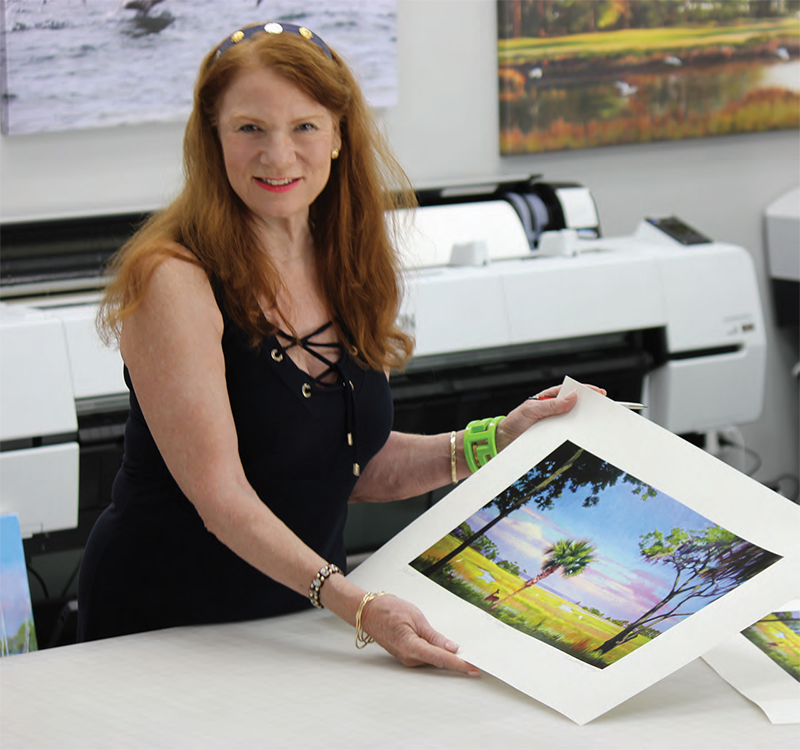