Every time Morten Solberg and Terri, his wife of 44 years, go out for dinner, he pulls out a pen and sketches something on a piece of paper. And then he leaves the drawing for someone else to discover.

Those who find his sketches in the restaurants of Bluffton and Hilton Head Island might not know how lucky they are: Solberg is a wildlife painter and abstractionist of considerable renown, both in the United States and abroad. His works — done in watercolors, oils and acrylics — sell for thousands of dollars.

Solberg is quick to point out that he doesn’t paint for fame or fortune.

“All I ever wanted was peer recognition,” the 84-year-old Cleveland native said. “I feel very fortunate that I can make a living at what I do.”

He attended night school at the Cleveland Institute of Art to learn about painting and design and worked for American Greetings Corp. as a designer and art director from the late 1950s to the late ’60s. He moved to California to work for a different greeting card company. He stopped painting for a while and took up photography. He freelanced and then devoted himself full time to painting 1971 after he exhibited a watercolor series for a retrospective at a gallery, won awards and sold some of his work. In 1977, two limited-edition prints of his work were published and sold in art galleries worldwide, further cementing his standing as an artist.

MORT SOLBERG IS A FAMOUS, AND I MEAN FAMOUS, WILDLIFE ARTIST. 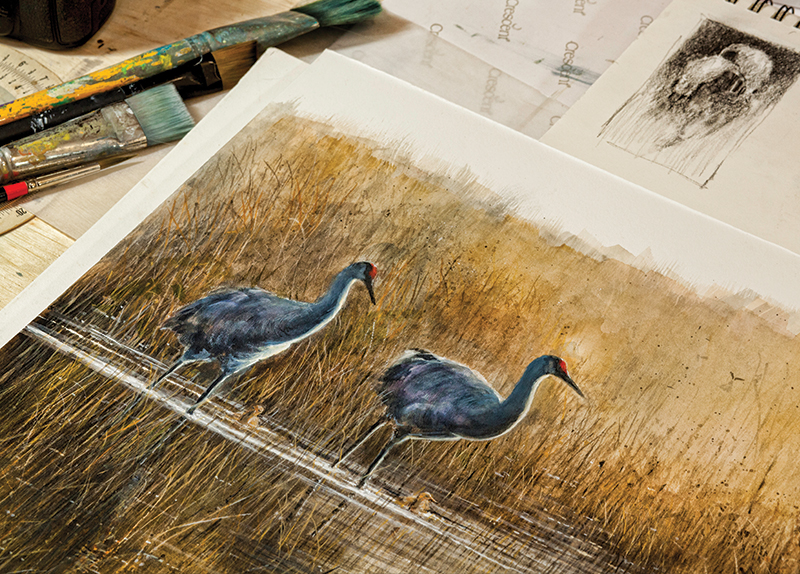 “My paintings were received very well, and I never looked back,” said Solberg, who has three daughters with his wife and four sons from previous marriages. Though he’s had some health issues lately, he still has an artist’s charm and a twinkle in his eyes above his white beard.

During one period in California he painted Native Americans and their culture, fascinated by his family’s ancestral connection to them, as well as his Norwegian heritage.

“Once I started on Native American paintings, they painted themselves,” he said. “I had no idea, when I finished a painting, how I painted it. All I focused on was shapes, and each one of those shapes became representational.” 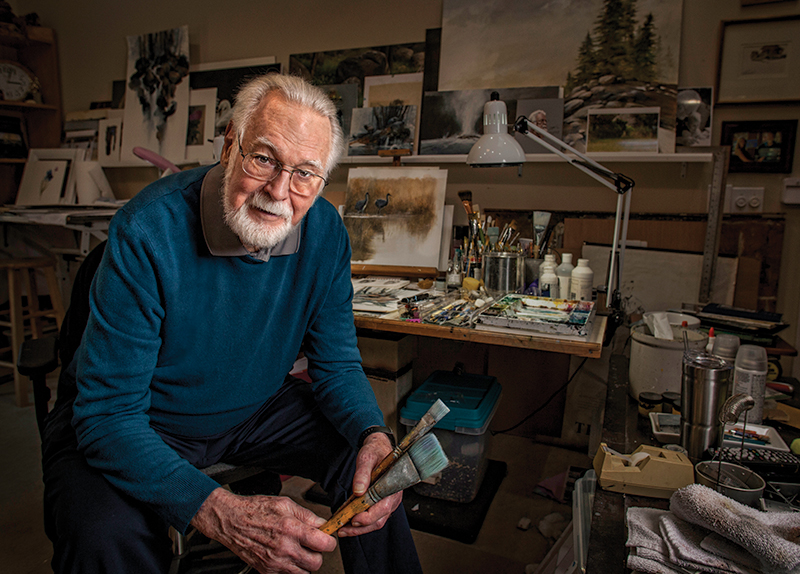 Solberg and his wife moved to Rose Hill in late 2015 after she fell in love with the Lowcountry during several visits to the area. Moving here was fine with him, he said, because he can paint anywhere.

But in his heart, “I love it here, but I’d rather be in the mountains, but I can’t do that physically anymore” because of the altitude and difficulty breathing, he said. “We have everything up there — bears, elks, moose, antelope, wolves.”

Locally, Solberg is represented by The Red Piano Art Gallery in Old Town Bluffton, and he’s quite pleased with the reception he’s received from collectors. He’s also represented by four other galleries nationwide and has two Western watercolor exhibitions coming up that will eventually make their way to Europe. He’s conducted workshops with the Society of Bluffton Artists and in high schools, has judged local competitions and wants to work with young children. 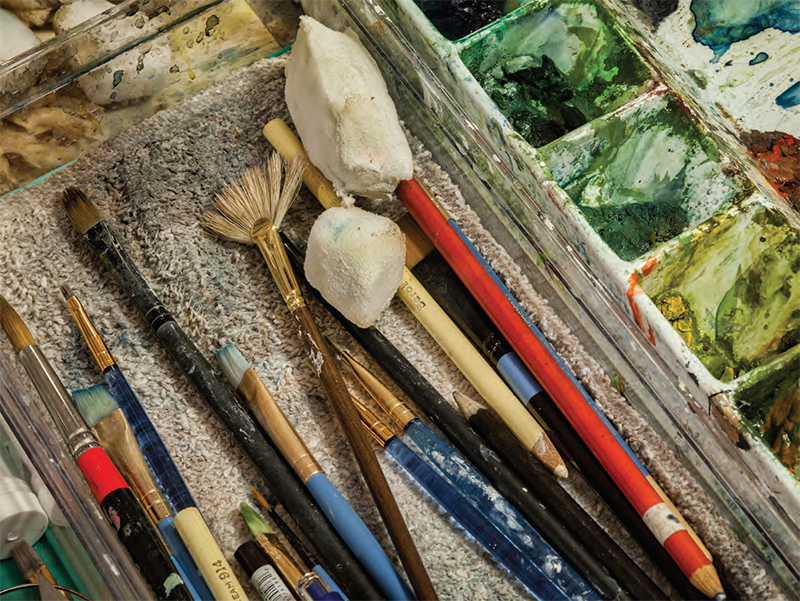 And the Lowcountry is quite pleased with him, as well.

“Mort Solberg is a famous, and I mean famous, wildlife artist,” said Ben Whiteside, who owns Red Piano with his wife, Lynn. “We’re thrilled to represent Mort; he’s a feather in our cap.”

Whiteside said Solberg is a master in any medium he showcases on canvas. 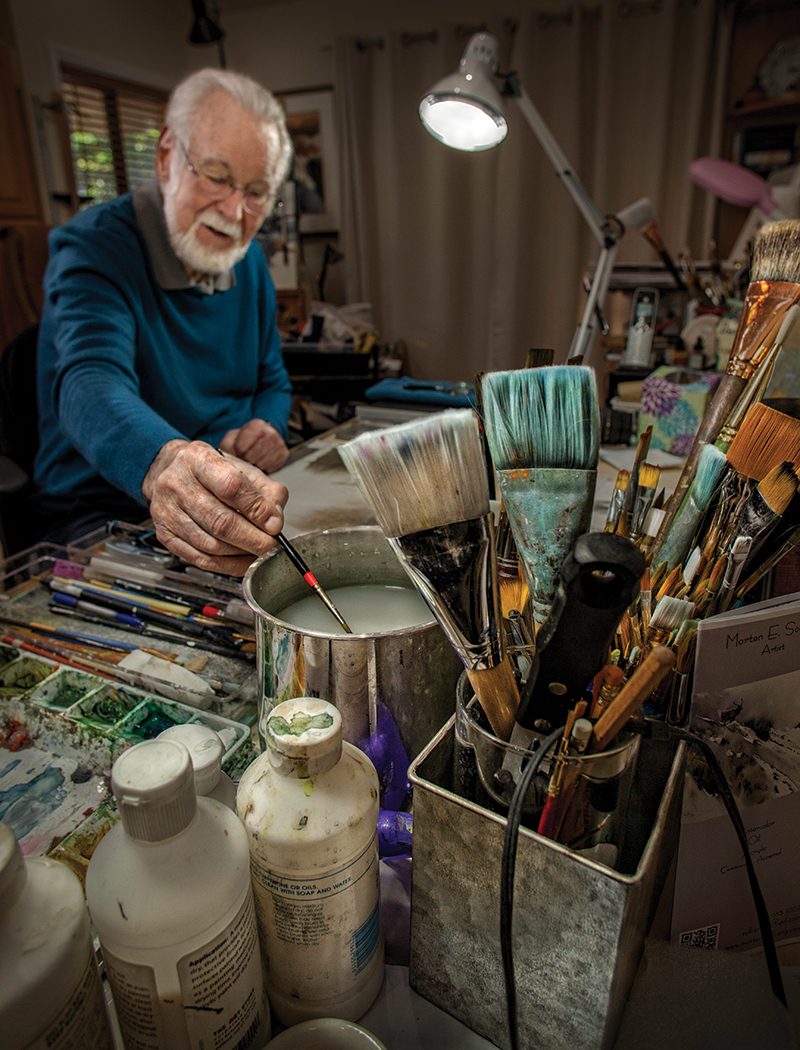 Today, in his home studio — with his wife, “my strength, cracking the whip” and lending her visual perspective to his work — he’s “trying to tell stories of what’s here,” Solberg said. Egrets, herons, Pinckney Island water at high tide, he wants to paint it all.