JONATHAN GRIZ IS A YOUNG GOLFER TO WATCH

He doesn’t have a driver’s license yet and he’s three years away from being able to vote, but Jonathan Griz is already a better golfer than many people who have dedicated a lifetime to the sport. The Hilton Head Island ninth-grader is currently ranked No. 22 in the world for players 18 and younger and hopes to join the PGA Tour after college.

“I’m travelling a lot to tournaments all over the U.S.,” he said. “Golf is like my job.”

Griz, 15, is the second youngest of Marybeth and Paul Griz’s five children. Marybeth said the couple, who live in Hilton Head Plantation, realized that Jonathan had a special talent when he was 4 years old. 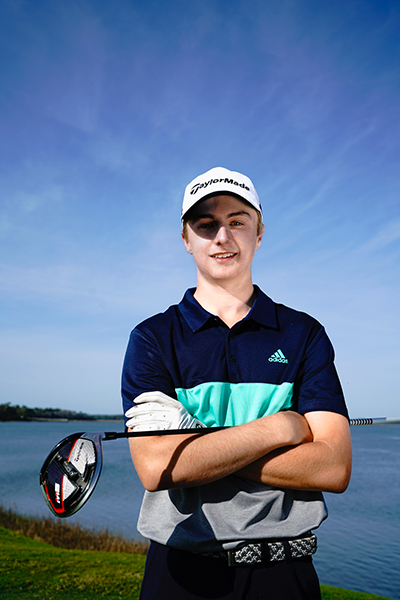 “My husband is a very good golfer and taught all our kids to play. One day, he teed up a ball in the backyard and asked me to watch Jonathan hit it. He told me, ‘Our road for Jonathan will be very different,’” she said.

Jonathan played in his first golf tournament when he was 7 and hasn’t looked back. His list of accomplishments is long: He is the top junior in South Carolina and became the youngest player to win the Harvey Brock Orange Jacket Classic at Pickens Country Club. He’s also the youngest golfer to win the prestigious Bobby Chapman Junior Invitational. Last summer, he earned the victory at the Carolinas PGA Junior and was the top qualifier for both the U.S. Junior Am and the Big I National Championship, where he finished fifth. In 2018, he won both the Carolinas Junior Boys’ Player of the Year and the South Carolina Junior Player of the Year.

And he stepped into the national spotlight last summer when he qualified for the U.S. Junior Championship at Baltusrol Golf Club in Springfield, New Jersey. Last month, he won The Gator Invitational in Jackson, Mississippi.

Home-schooled through elementary school, Jonathan attended Hilton Head Preparatory School for middle school and is now back to being homeschooled. He studies in the mornings and then heads to Colleton River, where he first works out in the gym for an hour and then putts for an hour, chips for an hour, hits balls for an hour, and plays 18 holes under the watchful eye of Matt Lucchesi, Colleton River’s director of golf.

“His work ethic is a strong suit for him. He has high expectations of himself,” Lucchesi said. “It’s tough. There are a lot of good players out there.” Jonathan’s father, an accountant who owns Lighthouse Tax & Consulting LLC, is still his swing coach.

“My dad comes [to Colleton River] after work every day and we play about five holes,” Jonathan said.

His mom is his manager, accompanying him to all his tournaments and supervising his sponsorship deals with Adidas and TaylorMade. Because junior golfers aren’t allowed to accept cash prizes, the family shoulders the financial burden of his rise in the sport.

Griz won’t graduate high school until 2022, but coaches from top colleges have been paying attention to him for years. He is verbally committed to the University of Alabama and plans to start taking college courses online soon so that he can focus on golf while at university.

“When I go to college, I’ll be there to improve [at golf] and get ready for the PGA Tour,” he said.

Deeply religious, Jonathan believes that the determination, confidence, skill and commitment he needs to advance in the game come from God. He spends time in prayer before every tournament and credits his family’s Christian faith for making him mature beyond his years.

“I believe that I’m not just here to play golf,” he said, “but to reflect the light of God in everything I do.”

This month, Jonathan will take time out from his schedule to attend the RBC Heritage Presented by Boeing. The tournament has a special place in his family’s story, because his dad proposed to his mom at the tournament in 1996.