SECURITY OFFICERS IN GATED COMMUNITIES ARE THE REAL DEAL

Many Lowcountry residents pass through security gates every day, giving the security officer inside the guardhouse a wave as the gate opens and they roll into one of the island’s many gated communities or plantations.

For others, the security guards aren’t as welcome a sight — especially for those who arrive to visit a friend but discover that a promised pass has not been called in. The island’s gatekeepers are firm but polite: Only those who have the proper credentials may enter.

Whether standing guard at a community’s gate or cruising the streets of the plantation, these trained professionals make residents’ security their top priority.

Certified by South Carolina Law Enforcement Division and subjected to exhaustive background checks and drug tests, security guards typically have the same powers as police officers, up to and including carrying a gun. Whether patrolling for trespassers or responding to calls about suspicious people, they are the first line of defense. And there’s a reason they have to be trained for anything, as Green found out when a resident called in a report of an alligator in a carport.

AT A CERTAIN POINT WHEN YOU’VE BEEN HERE, YOU BUILD A BOND OUTSIDE OF JUST PROVIDING SECURITY
– Willie Joe Rice 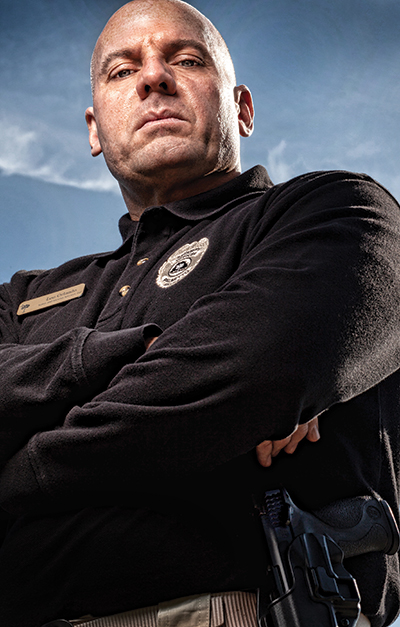 Fortunately, she was able to coax the trespassing reptile to a nearby pond using another piece of standard equipment for Lowcountry security guards: a lasso stick.

As a former New York City police officer, Lou Orlando knows a thing or two about staying alert. In adapting to his role with Palmetto Bluff security, Orlando created what he calls a “fair and firm” approach, one that blends his authority as keeper of the peace with his role as ambassador to a globally recognized destination.

“We want to be welcoming at that front gate,” he said. “We’re here to not only sell this property but have people as return visitors.”

Behind his friendly smile is a dutiful approach to keeping the thousands of acres of Palmetto Bluff secure, executed through an intricate system of decals, patrols and coordination. Adding to that workload is the relatively open nature of Palmetto Bluff.

“I’m lucky that community director Charles Huggins gives us every tool we need to succeed,” Orlando said. “If everyone coming in that gate actually went to Buffalo’s who says they’re going to Buffalo’s, they’d have a line around the corner. People know it’s open to the public and we want them to come and enjoy it, just respect our residents. And our residents are so kind to us up at the main gate.”

Those residents are a huge part of what makes these security professionals tick. In his 33 years as head of security for Long Cove, Willie Joe Rice has befriended many of the members inside the gates.

“At a certain point when you’ve been here, you build a bond outside of just providing security,” Rice said. “I’ve had invitation to Ohio State games, I get invited to dinner. … The hardest part would be losing a member, whether they move or they pass on.” 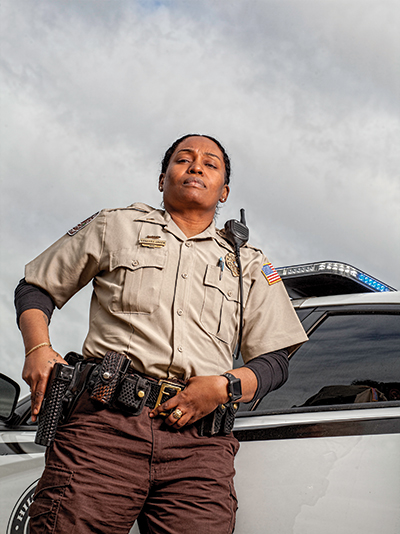 Rice has seen the job of security evolve and change over the years. When he started, his co-workers were typically retired military members looking to translate their skills into an enjoyable semi-retirement. Today, he sees a much younger workforce filling security roles at Long Cove. And even as he has risen in seniority, Rice enjoys being in the trenches alongside his fellow officers.

“It’s always challenging. It’s always different. After 33 years it still has a heartbeat,” he said. “I work on the line with my guys. I’m out in the patrol car. I’m in the office. I do whatever my guys do.”

It’s that rapport with his community that defines the job for Rice — especially every Friday, when one thoughtful member drops off doughnuts. And for all these security professionals, that love of where they are and who they work for reminds them daily why they do what they do.

“Every day is different,” Green said. “I would say being able to bring a smile to someone’s face I’ve done my job for the day.”

“Sometimes you get caught up in the minutiae of work,” Orlando said. “But every once in a while, you have to walk to the end of the dock and enjoy a sunrise.”