Bluffton High School principal Denise Garison always wanted to help people. She decided to channel that desire into teaching while living in Okinawa, Japan, with her family when she was a child. Her fourth-grade teacher was young and energetic, and Garison wanted to inspire and motivate other kids the way her teacher had motivate her.

Garison was the first in her family to graduate from college. As part of a military family, she traveled a lot and has lived all over the world. But she never let go of her dream to teach.

She started her career in education in 1986, teaching middle school math in North Carolina. Later, while she was teaching at the high school level, her principal encouraged her to join the administration. She loved the classroom, but soon realized that she could help more students as an administrator. She served as the assistant principal and then principal of Jack Britt High School in Fayetteville, North Carolina, overseeing more than 2,000 students, 50 percent of them from military families.

WHATEVER YOU WANT TO DO, GO OUT THERE AND DO IT.

While at Jack Britt, she noticed a disparity in achievement among minority students and worked to close that gap by encouraging teachers to spend more time with students who were struggling. The school began offering Saturday tutoring sessions — where teachers were paid extra, and some even volunteered, to give extra help. The program was so successful, Tom Brokaw highlighted her work in his book “The Time of Our Lives,” and the school achieved top rankings in the state for academic growth and graduation rates. 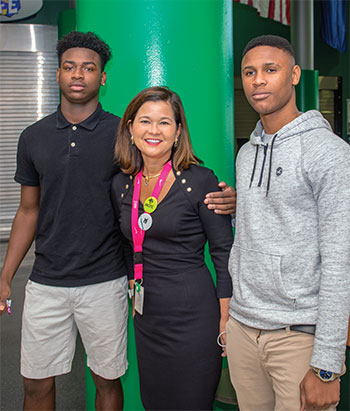 She likes working with high school students because she enjoys helping them figure out what’s next.

“A high school person is starting to plan for the future,” Garison said. “I feel like I can have a conversation with them about the next step.”

The bookshelf in her office at Bluffton High is filled with photographs of her family — her two daughters, her parents, her fiancé. When her daughters graduated from Jack Britt, she was principal and got to hand them their diplomas. Now her eldest is a first-year middle school teacher, and her youngest is a third-year nursing student. She was drawn to the Lowcountry because her fiancé works for Gulf Stream, and researched Bluffton High, she knew she wanted to be the principal. There’s a lot of community involvement, she said, and the students came here from everywhere.

“Because I moved around when I was growing up,” Garison said, “I feel like I can relate to a lot of the students here.”

Among the school community, she has a reputation for being tough but consistent and fair. And her mission is making sure everyone graduates. When students are falling behind, she encourages them to get back on track. And when a student is capable of more, she pushes them to higher levels with more advanced classes.

“I want to find the students who aren’t asking for help,” she said. “This is my life.”

She’s a regular spectator at student performances and sports events. Being there as an adult is important, she said, because it lets the students know that she’s watching and that she cares.

Her advice for women: Go for it. “Whatever you want to do,” she said, “go out there and do it.”