THE MARSH TACKY IS DESCENDED FROM THE HORSES BROUGHT TO AMERICA BY SPANISH EXPLORERS IN THE 1500S.

Waiting for the Daufuskie Island ferry at Bluffton’s Buckingham Landing, Erica Veit stands in her cowboy boots, sipping coffee and greeting the locals. She’s dressed to work in the barn, managing the needs of four endangered marsh tacky horses on a barrier island only accessible by boat. She doesn’t seem to mind the trip from the mainland, using the time to prepare herself for her busy day as executive director of the Daufuskie Island Marsh Tacky Society. Her charity is just over a year old and is already educating island visitors on the history and legacy of the rare marsh tacky, the South Carolina state heritage horse. 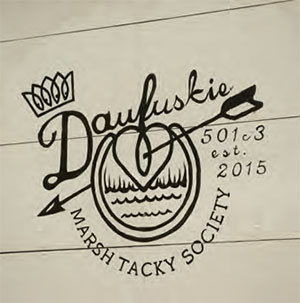 The ride to Daufuskie is around 30 minutes, part of the daily existence for residents of South Carolina’s southernmost Sea Island. Veit is used to the trip, having lived in Bluffton and worked on Daufuskie since 2002. She moved to the Lowcountry in 1999 as a scholarship athlete on the Savannah College of Art and Design’s equestrian team, eventually bringing her family as well. In 2012, a close friend convinced her to accept a position as the equestrian director at Melrose Resort. In her role there, she helped bring marsh tacky racing back to Daufuskie.

However, in recent years budget constraints forced the owners to shut down some of the resort’s amenities — like the equestrian center. Veit returned to her career in real estate, then eventually enrolled at the College of Charleston to obtain a degree in nonprofit management. Combining her love of Daufuskie and marsh tackies with her knowledge of charitable organizations, she started the Daufuskie Island Marsh Tacky Society on a 4-acre property with a lean-to and a pasture. She now boasts a four-stall barn facility near Daufuskie’s bustling Freeport Marina, educating the tourists streaming onto the island throughout the year. 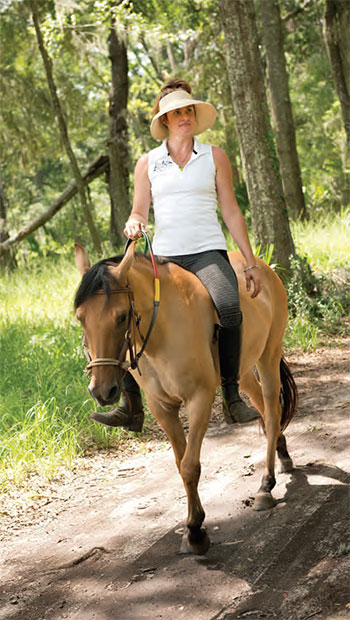 The marsh tacky is descended from the horses brought to America by Spanish explorers in the 1500s. The rugged horse was able to adjust to the conditions in colonial South Carolina, developing a signature gait to help them navigate the area’s boggy pluff mud and swampy terrain. Called the “Swamp Fox Trot” in honor of Gen. Francis Marion and his men, who rode the steeds into battle during the Revolutionary War, the horse’s unique movement is a combination of adaptation to the environment and genetics. On Daufuskie, residents used marsh tackies to hunt, ride and work; they’ve been used by native islanders for years.

Though marsh tackies once were plentiful in the Lowcountry, only about 360 documented horses remain today. The Daufuskie Island Marsh Tacky Society is working to increase those numbers through breeding efforts. Veit had planned on breeding her stallion with a mare at some point, but a twist of fate moved up that goal.

When Hurricane Matthew bore down on the area in October 2016, most island residents were forced to evacuate — and, in many cases, leave some of their most valuable possessions behind. Veit had made plans to get the marsh tackies off the island by barge, but those plans fell through. Using her connections at the Melrose equestrian facility, she and her husband, Tony, abandoned their structure at the marina and moved inland to help the tackies safely ride out the storm. 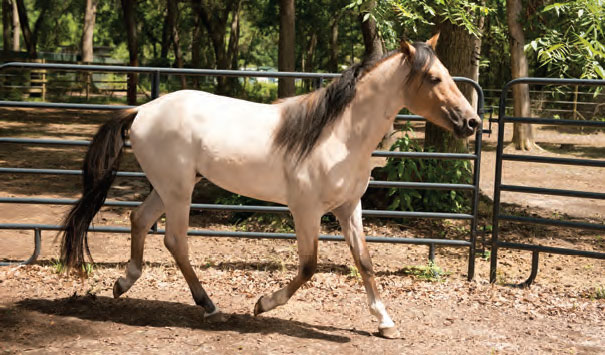 The horses rode out the storm at Melrose, and stayed there well after Matthew had passed while Veit cleaned up tree damage at their normal home. While at Melrose, the horses had to be pastured together and stallion Lucero took advantage of the time together to increase the herd, impregnating two of the mares. When they arrive at the end of summer, the foals will join Veit’s other horses, and they’ll be the first new marsh tackies born on Daufuskie in years.

“We are celebrating the expectation of the first foal in what some say is 30 to 40 years, so decades,” Veit says. “The last marsh tacky was taken off Daufuskie in the 1980s to make room for golf course development.” 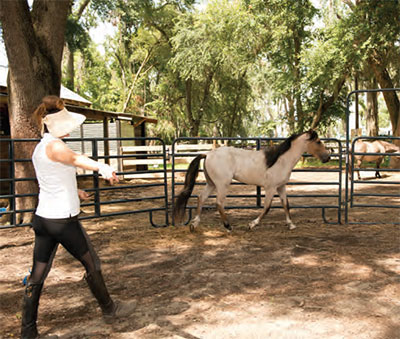 As her pack of horses grows, so do Veit’s plans for the marsh tacky group.

With land available from a lease agreement with the Palmetto Trust for Historic Preservation, she will move her tackies inland to graze in quiet pastureland in the historic area of Daufuskie. Veit also is planning several initiatives to expand her charity’s reach. She is launching a capital campaign to fund office and retail space at Freeport Marina, and she has plans for a marsh tacky taxi service.