A dolphin trainer, vet tech and diver moved from Pennsylvania to Hilton Head, wiggled into her 30-pound silicone tail and became a full time mermaid after the surprising success of her book, “Sammy the Sand Dollar” in 2016.

“I wanted to teach kids how to identify dead or alive sand dollars and encourage them not to take the live ones home,” Leipold said. “And I wanted to write children’s books that educate kids about conserving marine life. I’ve always felt an affinity for the ocean.”

When Leipold first became a mermaid, her friends and family weren’t surprised. As Jacques Cousteau said, “people protect what they love.” Her family knew her passion for the underwater world. Every day in pre-school she carried a stuffed dolphin with her. 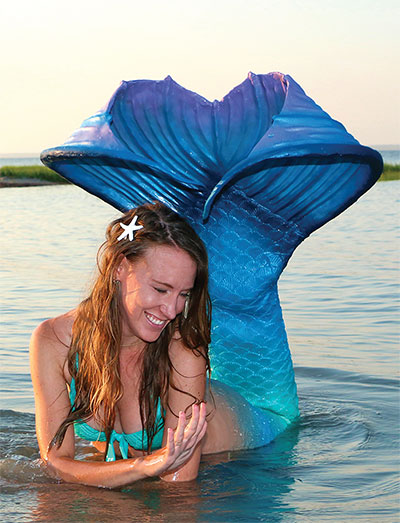 “I found my tail on themernation.com after a lot of research. Squeezing into the tail every day for photo sessions or boat tours is like tying your legs together and not being able to walk. I need to be carried on land. But in the water, I feel at home and can swim better than I ever have before. I now have an understanding of how dolphins can swim so gracefully and so fast,” Leipold said.

After the success of “Sammy,” she wrote and illustrated two other mermaid books that teach people to turn off lights at night during sea turtle nesting season and to stop feeding dolphins.

“But I felt like I needed to do more.”

Leipold’s evolution to “Mermaid on a Mission” developed in part from watching “Racing Extinction,” a stark documentary that charts species extinctions, including the mass slaughter of exotic marine life – sharks, manta rays and humpback whales – for food, utilities and folk medicines.

“I put my passion for conservation together with my love of being in the water and became a mermaid whose purpose is to educate and conserve. Caring about things other than myself and making a difference is my world view,” she said.

Mermaids are a worldwide cultural trend today. They are a top Google search term. Their enduring allure is primal and ambiguous – part human, part fish. They are female, exotic, and untamable. Mermaid voices are enchanting; they can hypnotize a sea captain to run his ship ashore. They represent power, freedom, danger and possibility. Mermaids play on our subconscious love of beauty, water and motherly care. Their child is the ocean and underwater world.

In addition to a series of educational books, Leipold and her partner, Rick offer mermaid portraits and photo sessions, special events, and mermaid boat tours that teach people about local ecology and wildlife. They donate 10% of their proceeds to South Carolina’s Sea Turtle Care Center where stranded sea turtles go for treatment.

“The mystery and fantasy of mermaids fascinate little children. Mystery is a big part of the allure,” she said.

Fairytale author Carolyn Turgeon once said mermaids are appealing because “they are smart, adaptable and have super powers of echolocation, shape-shifting, and time travel. They also have signature whistles and acoustic cloaks that make them invisible to humans.”

Leipold teaches kids during her mermaid boat tours, appearances and photo sessions. “Kids pay attention to mermaids,” Leipold said. “Education is the most important aspect of what I do. Without marine conservation awareness, human beings can do a lot of damage.”

When Leipold dons the tail and talks to children’s groups, their questions are often the same: “What do you eat, where do you sleep, and do you have any shark friends? Do you breathe air? How do you get out of the water?” An adult once asked, “Do mermaids make mermaid babies?”

“Mermaids give depth to life, they can change the way girls and women look at themselves. They’re empowering,” Leipold said. “I think mermaids teach girls that, if you work hard enough, you can do anything you set your mind to. I can’t imagine a world where I am not doing things every day to make my ocean home a safer place. More people need to stand up for the creatures that don’t have a voice.”

One of the lessons Leipold teaches is about the damage plastic causes oceans and marine life. “Plastic doesn’t ever go away. When you’re using plastic bags to carry groceries or plastic straws to sip drinks, keep in mind that they aren’t disposable. Plastic waste is saturating the ocean,” she said. “Too many of my oceans friends are ingesting plastic and suffocating to death.”

Marine life also faces habitat destruction and accidental capture in fishing gear. And while scientists still lack a complete understanding of climate change, they have established that the ocean is warming due to human activity and higher emissions that pose profound risks. “Climate change is bigger than anyone of us but together we can make a change,” Leipold said.

“Being a mermaid is not about sitting around looking pretty and getting your picture taken. I’m not Santa Claus. Being a mermaid is making human beings aware of marine life and countering any threats to it by teaching people how to conserve it,” she said. “At the end of the day, it doesn’t matter how many Facebook ‘likes’ or Twitter ‘retweets’ we get. What matters most is what we did that day to make the world a better place.”

Go to www.mermaidofhiltonhead.com for more information.