Four percent. It is a figure that both angers and empowers Brandon and Caroline Arrieta. A number they never had to consider before the diagnosis, when they were consumed with running a successful restaurant and raising their four kids. 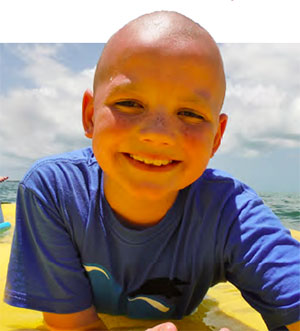 Then their 9-year-old son Alex, a vibrant budding soccer star nicknamed “Smiles” because of his intoxicating grin, came home pale and listless. Fourteen months later, after enduring levels of chemotherapy meant for adults five times his age and two days after learning that he was finally free of the toxic blood cells that had rendered his bone marrow useless, Alex succumbed to an aggressive adult strain of acute myeloid leukemia. He passed away April 27, four months after a brief remission turned into an endless hospital stay at the Medical University of South Carolina.

While at the hospital, Alex met three other children waging their own battles with cancer. Kaylin and Skyla also had AML. John had a tumor in his belly.

John died a day after Alex. Kaylin passed one month later. Then Skyla in late October.

“That is four out of four kids with zero option,” Brandon Arrieta said. “The statistics tell you one story, but the truth tells another.”

That truth is what drove Alex to start a charity, Lambs for Life. He battled AML courageously with a stuffed lamb by his side. He told his parents that Lamby was for comfort, but at a pep rally held by his classmates at Hilton Head Island Elementary School for the Creative Arts before his final hospitalization, he told a TV reporter the real reason.

“It’s the lamb of God, it’s holy,” Alex said, showing a faith few adults truly ever comprehend, let alone a 10-year-old. While the answer stunned his parents, it did not surprise them.

“He took in levels of chemotherapy in three months that were meant to be given over three years. When that did not work, his doctors told us of an experimental treatment that was painful and likely deadly, and we gave him the choice and he chose to take it, to fight,” Brandon said.

“He had amazing faith. Toward the end, he rarely slept. He had so little lung function, we had to shift him all through the night just to angle him in bed so the lungs would pump blood and air. But he never wavered. It took his physical strength, but he was so strong emotionally and spiritually.”

The story of Alex’s initial diagnosis in 2015 brought a wave of letters and well wishes from across the country. His parents’ efforts to bring him joy despite the loss of his hair and vitality resulted in gifts from Alex’s idols like Austin Powers himself, Mike Myers. Lionel Messi sent an ultra-rare Argentinian national team jersey signed by every player. His love of the “Rocky” movies brought well wishes from the lead singer of Survivor, who told Alex he embodied the “Eye of the Tiger.” The little boy won the hearts of Sylvester Stallone and Mr. T, the latter speaking often with him — including just minutes before he died.

When a Christmastime remission soon turned into a relapse, Alex didn’t want letters or toys. He onlywanted folks to send him stuffed lambs, and he received thousands of them.

“We asked him what would he do with all these animals; there was only so much room in the hospital,” Brandon said. “He said, ‘They’re not for me. I want every kid fighting cancer to have a Lamby like me, to give them hope.’”

Alex picked out items for a care package — items meant to inspire laughter and playtime like whoopee cushions, flying fists, a barrel of monkeys and Airheads candy, combined with thoughtful touches like a soft handmade flannel lamb pillowcase to make the endless hospital nights a little easier to endure.

“Every item, from the disappearing ink to the paratrooper figurines to the pillowcase, it’s all Alex, through and through,” Brandon said.

That became even more true when the family learned in early November that their child and his best buddy would be the stars of a children’s book series, “Lambs for Life: The Adventures of Alex and Lamby.” The first book, “Lamby’s Loot Pack,” will replace Lamby’s letter in each care package once the book production is completed. The family is targeting the one-year anniversary of Alex’s death – April 27, 2017 — as the release date to celebrate his life.

Just days after Alex passed, still riddled with grief and trying desperately not to become a statistic themselves, the Arrietas began assembling the care packages along with a team and a system to distribute them. Seventy percent of marriages end in divorce when a child is diagnosed with pediatric cancer, and that rises to more than 90 percent if the child dies. But the Arrietas say their mission to fulfill Alex’s dream keeps them strong and focused on caring for their three surviving children. 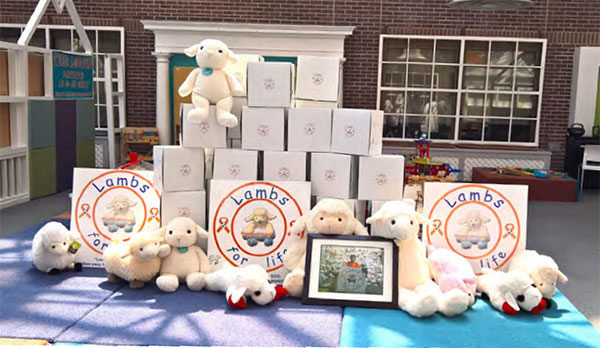 Lambs for Life sends care packages to hospitals for children in cancer treatment.

“We’re still struggling to smile like Alex, but this drives us,” Brandon said. “We’re going to spread his message to so many kids, and we’re going to inform people and inspire them to take action like Alex wanted.”

During his second bout with AML, Alex and his family began to research and understand the realities of pediatric cancer research. It made no sense why Alex’s treatment options were so limited, why he was being given adult medicines with very little track record being effective in children.

“People see things like St. Jude’s Hospital and they think, ‘Oh, they got it covered.’ But the reality is St. Jude’s is only there because no one else was,” Brandon said. “They are wonderful, they do so much. And we see the amazing kids in the commercials and we think we’re making strides, but we have so far to go.”

Here’s the reality: just 4 percent of federal funding for cancer research goes to pediatric cancer. That currently is about $25 million per year — less than the cost of developing and bringing a drug to market.

In comparison, other more adult forms of cancer like breast and prostate cancer get $500 and $800 million, respectively, in federal research funds annually.

Pharmaceutical companies are profit driven, so they develop drugs for adults. The drugs are put through clinical trials and testing before they’re brought to the market and made available to adult patients. It’s only after all this has been done — a 15-year process in most cases — that companies finally begin to test the drugs on children.

“The system is such a mess. We end up treating kids like little adults instead of tailoring treatments to their bodies,” Brandon said. “You or I get cancer, it’s probably lifestyle related and we can make adjustments to help. Kids, they did nothing to get it. Adults can get scans and checkups, but we never look for cancer with kids. And in return, there is so little research designed for kids.

“Alex was just the sixth child given this experimental drug and they had no idea how much to give him. He was a guinea pig. In the end, it killed the cancer cells, but it also shut down every system in his body. So they learn from No. 6 and give No. 7 a little less.”

Brandon paused while holding back tears.

“We can do so much better than this,” he said. “We must do better. But we have to inform people first.”

That’s where the second part of Lambs for Life comes in. The charity is not looking to raise money; awareness is the key.

“We were blessed to have folks like John Kasich, Hillary and Chelsea Clinton and Marco Rubio visit and meet with us while in the hospital, and they truly helped educate us and point us in the right direction,” Brandon said. “They made us understand that this funding, it truly still revolves around the squeaky wheel concept. Those that speak up the loudest, they’re the wheels that get the oil.”

The Clintons connected the Arrietas with representatives of Autism Speaks, an organization that has been incredibly successful in creating awareness and funding for autism research.

Just six months after Alex’s death, Lambs for Life volunteers (Lambassadors) are working hard to create care packages, but also are having success with grass-roots education. The Arrietas have taken the marketing and people skills that led to so many awards as the owners of Hugo’s and put that into creating education events in cities with hospitals that administer pediatric chemotherapy.

Media and public officials are gathered to launch the care package drive for the hospital, which in turn leads to grass-roots efforts in the community to empower citizens to impact change with state and federal elected officials.

The Lambs for Life website has a form where visitors can submit their names and addresses, and then a personalized letter to all ofthe donors’ state and federal representatives is created and sent by Lambs for Life periodically, as well as follow-up calls and meetings. The end result: virtual squeaky wheels asking for funding thousands at a time.

“Every two minutes, another child is diagnosed with cancer,” Brandon said. “It takes literally less than two minutes for folks to fill out this form at lambsforlife.org. And we see it already; we’re on our way to having a major impact.

“It’s hard to find child advocacy groups when it comes to cancer. Often, families start niche projects in their towns to honor their children who died from cancer. But none of these efforts are connected, because so often, local efforts are all the grieving parents can handle and communication breaks down, so none of the programs are connected into a bigger effort,” Brandon said. “We understand that grief, we live it every day. But Alex has empowered us. This is our mission and our purpose now. It lets us deal with the grief while at the same time knowing that his spirit and his passion will lead us to help kids get the attention they deserve, so the thousands of Alexes out there can live long beyond the treatment.”