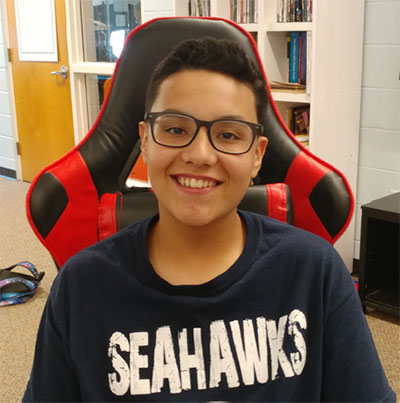 Sebastian Vela Garcia of the Boys & Girls Club of Hilton Head Island was named 2021 Lowcountry Youth of the Year. He is a junior at Hilton Head High School.

As the Lowcountry Youth of the Year, Sebastian will receive a college scholarship worth $500 and continue on to compete in Boys & Girls Clubs of America's the State Youth of the Year competition on April 22.

“Sebastian has grown so much over his years at the Club – maturing from a shy and reserved kid to one of the most outgoing and social teens in the Club’s Keystone Service Club”, says Kim Likins, Club director.

Last year, Sebastian and a few other members of the Keystone Club took on a new business project. The teens hatched the idea of running a snack shack during Club hours.  Sebastian and his fellow Keystone Club members worked through all the details, named the business Snackity Shack, and one season into the business, the group earned enough money to plan a trip to New York City.

Sebastian now consistently excels in school with straight A’s and received an invitation last year to Hilton Head High School’s Beta Club, identifying him as a student with an outstanding GPA and honorable behavior in and out of school. Sebastian also works during the summer as part of the Club’s Jr. Staff.

“Sebastian embodies the Club values of leadership, service and academic excellence and serves as an excellent role model for other young people in the Club,” said Chris Protz, Chief Executive Officer Boys & Girls Clubs of the Lowcountry.

When asked how the Boys & Girls Club changed his life for the better, Sebastian said, “I was too quiet when I first came here.  Since joining the Club, I started learning more and more, and now I express myself with confidence, I talk with more people and I have more friends.”

“We are especially excited because in my 10 years at the Club, this is the first time one of our teen Club members has been recognized as Lowcountry Youth of the Year,” Likins said.

“I want to give special thanks to our staff, in particular Coach Godsun, Miss Melissa, Mr. Bernard and Coach Ronnie, for all they have done to support and inspire Sebastian along his journey.”

The Boys & Girls Clubs of America’s Youth of the Year title is a prestigious honor bestowed upon an exemplary young person in recognition of leadership, service, academic excellence and dedication to live a healthy lifestyle.