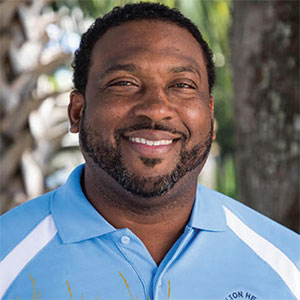 Alex Brown had a history of active business and community involvement on Hilton Head. It wasn’t until the coronavirus pandemic winnowed down his busy schedule that he had time to assess his ability to make real change.

He started thinking about, and praying on, making a run for the soon-to-be-vacated Ward 1 town council seat, which he won in November.

Brown, 47, who served as a member of the planning commission, is also vice president of operations for Camp Hilton Head, a company that sells Hilton Head-inspired merchandise. His community service is lengthy, including coaching and mentoring youth.

“When we shut down (for the pandemic), I didn’t have anything to do,” Brown said in a recent interview. “I started reflecting and praying on it. I said, ‘You know Alex, you might be spinning your wheels because you keep talking … making recommendations … trying to convince folks. At the end of the day, the decision is somebody else’s.’ So, I had a moment, and said, ‘I need to do this.’”

In doing “this,” he has compiled a long list of goals that he wants to achieve. His top priorities are preserving the Gullah culture and reexamining the town’s concept of limited-service government.

“Preserving the Gullah Culture” can have many interpretations, but culture is about the people having a presence, he said.

“You need to have the land to have a presence on Hilton Head,” he said.

Brown’s family owns property in the Chaplin neighborhood that was bought by his great-great-grandfather, a former slave, after the Civil War.

In the 1990s, Native Islanders owned 3,500 acres of land in Ward 1, he said. Today, that number is about a thousand acres. The town acquired a sizable portion of that land.

“We just continue to diminish in land ownership and population, which means we’re diminishing in terms of preservation,” he said.

Hilton Head has commissioned studies in the past searching for ways to help maintain Gullah life and culture but with few satisfying results. That may be changing as the town acts on recommendations from the Gullah-Geechee Land & Cultural Preservation Task Force. It has hired a Historic Neighborhoods Preservation Administrator. It is also considering adding a Historic Overlay District to the town’s Land Management Ordinance. The overlay would allow for increased building density in historic neighborhoods and give more flexibility to landowners who operate businesses.

“We’ve never gotten to a point where we are looking at implementation,” Brown said, about the proposed changes to the LMO. “We’re close. When we go over the finish line, I want to make sure we go forward with enough momentum to keep going because this is just one in a long list of recommendations that came out of this (the task force) report.”

Historic communities remain threatened by new projects, like the U.S. 278 Corridor Improvement Plan. The idea is to ease congestions on the bridges leading to and from Hilton Head, but the six alternative proposals would all have a significant impact on the historic Stoney neighborhood.

The preferred route announcement is expected sometime this spring.

The town can do something about the Stoney community, Brown said.

“With the town owning as much land as we do in that area, there is an opportunity to revitalize it versus this whole push people out attitude,” he said.

Brown also said the town needs to expand its approach to the types of services it offers. He pointed out that the town has added a Director of Cultural Affairs and the Historic Neighborhoods Preservation Administrator. It is currently evaluating its parks and recreation programs and could use a person to oversee the day-to-day operations.

“They’d make sure our park and rec programs and facilities on HH are excellent and world-class,” he said.

The global pandemic slowed Brown down for a minute, but it provided him with an opportunity to push for real change in a place that is special to him for one simple reason.