Baseball is back. The National Pastime returned last month and there’s no better way to get into the swing of season then enjoying some great baseball reads. From the thrill of flipping baseball cards to the drama of a pennant-winning home run, Monthly has compiled a list of books and articles that are essential reading as we enjoy the return of Major League Baseball. 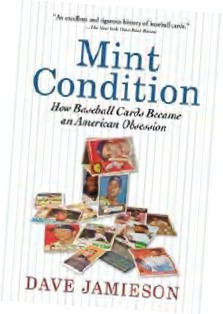 Mint Condition: How Baseball Cards Became an American Obsession, Dave Jamieson
The joy of opening a pack of baseball cards is just the starting point for this book that is full of insight. From the Civil War to the Topps monopoly and the oversaturation of cards in the 1990s, the book never ceases to inform.

An illuminating insight: The Great Depression crippled the nation, but one company thrived with sales of penny gum-and-baseball card packs, soaring to almost $1.5 million in sales in 1933. The belief was kids and families couldn’t afford to attend games during that era, but the connection to the sport was in the baseball cards.

The Summer Game, Roger Angell
An acclaimed writer for decades, this was Angell’s first baseball collection. Featuring his contributions at The New Yorker, Angell chronicles the 1960s and early 1970s - sitting in the stands during spring training, the bungling expansion Mets, the joy of watching Vida Blue pitch - with humor and sharp insight.

The Soul of Baseball: A Road Trip Through Buck O’Neil’s America, Joe Posnanski
Take a cross-country journey from ballpark to ballpark with O’Neil, a Negro Leagues legend and a lover of all-things baseball. Posnanski captures O’Neil’s love of the game and people.

Bottom of the 33rd: Hope, Redemption, and Baseball's Longest Game, Dan Barry
Barry, a New York Times columnist, talks to just about everybody involved in the 1981 minor league marathon in Pawtucket, R.I. From future MLB starts Wade Boggs and Cal Ripken, to the devoted fans, umpires and workers who witnessed the game turn from a cool spring evening to a chilling Easter morning, Barry captures the scene of the 33-inning contest.
An instant classic.

Ballplayer, Chipper Jones
The Braves Hall of Famer said the first bat he held was a Louisville Slugger with Mickey Mantle's signature. Jones was 3 years old and grew up to have a switch-hitting career the former Yankee star could admire. It is obvious Jones' father had a great influence on his career, as Jones said: "Nobody knew my swing inside and out like he did. He built it."

Underworld, Don Delillo
Delillo’s 1997 novel sweeps across generations. It all begins with the prologue and his fictional take on Bobby Thomson’s 1951 “Shot Heard ’Round the World” home run for the New York Giants that beat the Brooklyn Dodgers and propelled the Giants into the World Series.
DeLillo’s a master sentence writer and these lines capture the game’s bottom-of-the-ninth anxiety:
“The game doesn’t change the way you sleep or wash your face or chew your food. It changes nothing but your life.”

In Chicago, the final wait for a Cubs win mixes joy and sorrow, Wright Thompson, ESPN
The wait finally ended for Cubs fans when their beloved team won the 2016 World Series. The championship was the first for the franchise in 108 years and Thompson, an ESPN senior writer, was on the streets and in the bars of Chicago to capture the joy of the North Side.
A fan bought a copy of the newspaper just hours after the game, Thompson writes, and “held it up in the air like the Gospel, carrying it to his friends.”

Miracle on the South Side, Lee Jenkins, Sports Illustrated
It was the perfect pitching performance on a perfect afternoon and Jenkins was perfect in capturing the day and the moment.
In 2009, Mark Buehrle of the White Sox tossed a perfect game and Jenkins’ almost minute-by-minute account, with anecdotes from teammates, Buehrle’s wife and family, vividly brings to life the crowning moment of the pitcher’s career.

The Silent Season of a Hero, Gay Talese, Esquire
This 1966 story is a journalism classic. Talese profiles Joe DiMaggio in retirement, who is reluctant to talk. Talese follows Yankees legend cross-country, talks to his friends, and captures DiMaggio struggling with no longer playing and when the cheering has stopped.

Miracle of Coogan’s Bluff, Red Smith, New York Herald Tribune
“Now it is done. Now the story ends. And there is no way to tell it. The art of fiction is dead. Reality has strangled invention. Only the utterly impossible, the inexpressibly fantastic, can ever be plausible again.”