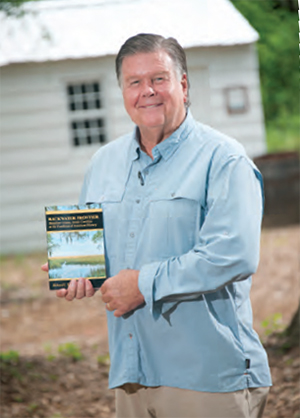 Published by the Heritage Library Foundation, “Backwater Frontier” is a compilation of stories about significant events that took place in Beaufort County and were firsts of their kind in the U.S.

“My motive in doing this (book) was really to help get all of these phenomenal stories told,” Thomas said, “... just really get the stories out there in a way that hopefully people find easy to read and informative.”

The book covers everything from Pedro Menendez de Aviles and the establishment of Santa Elena to Harriet Tubman and the formation of the Underground Railroad, plus more recent historical firsts like Charles Fraser’s development of Sea Pines.

“The most impactful learning from my research was that Beaufort County has a historical heritage that is unparalleled … in its duration, its diversity, and the fact that Beaufort County is a place where at least one highly significant event of regional or national impact occurred in every major period of American history,” Thomas said.

After Virginia Holmgren’s book “Hilton Head: A Sea Island Chronicle” years ago, Thomas was inspired to learn even more about the history of the Lowcountry. Through his research, he found that innovation, initiative and improvisation all seem to be part of the spirit of the Lowcountry.

“There is definitely something in the character of this region and the people who have come to it over the years that allows it to have been the seat of so many astounding developments that really have changed the course of history to follow them,” he said.

About three years ago, Thomas’ wife, Suzanne, was having some health problems so he spent a lot of time at home taking care of her. In his down time, he began writing about what he thought were the most impactful events of the roughly 500-year history of Beaufort County.

Prior to his career in the consulting field, he was a corporate executive for 15 years, working with PepsiCo, Canada Dry, HBO, the Discovery Channel and the Weather Channel, to name a few.

The couple moved to Hilton Head Island 21 years ago with their three children. In the early 2000s, he started the Outpatient Surgery Center of Hilton Head.

In 2000, the Thomases’ only son, Ret, died from Ewing's Sarcoma. The family started the RET Pediatric Cancer Foundation in their son’s memory.

Today, Thomas is president and CEO of Legacy Leadership, a consulting and training company that uses historic events to develop strategies for improving effectiveness in the workplace.

Every Wednesday night, he tells spooky stories about the Lowcountry at Zion Chapel of Ease Cemetery. The weekly sessions are sponsored by Heritage Library, where Thomas is a board member. For details and to purchase tickets, go to www.heritagelib.org or call 843-686-6560. For information on his tours, go to www.hiltonheadhistorytours.com or call 843-422-3842.