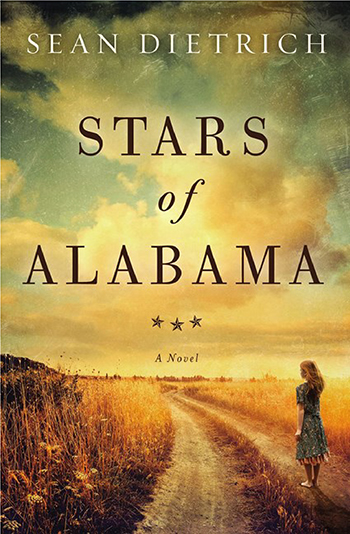 Set in the South during the Great Depression, Sean Dietrich’s new novel “Stars in Alabama” weaves together the stories of a homeless teen mother with the gift of healing, two migrant workers and a child preacher on the run from his violent father.

Their stories intersect when Marigold, the teen mother, leaves her infant in the woods when she goes into town to steal food. Migrant workers Paul and Vern find the baby and care for her as their own.

At times wondrous and heartbreaking, this is a story of survival, loss and the beauty that can arise from it.  As the characters struggle through years in different Southern locations, their stories come together as they learn that the people who love you like family may not actually be related to you. With that definition of family comes responsibility to each other.

Inspiration for this novel came to Dietrich the day his niece was born. “There was something about the idea of a mother missing her baby that stuck with me,” he said. Acknowledging that none of the characters in the book have an easy life, he said he wanted to convey that suffering can coexist with hope.

Dietrich, known as “Sean of the South,” is an author, columnist and musician. He writes a daily column which can be found on Facebook and his website, seandietrich.com, where thousands of loyal readers visit each day. Dietrich said he has 10 more books in the works and a memoir on his computer so expect more from him in the future.

Those familiar his writing will recognize his penchant for colorful, salt-of-the-earth characters. A natural observer of people, Dietrich has a soft spot for the overlooked. Day laborers, single moms, the elderly and dogs are found in many of his works including this novel. Fans will recognize Dietrich’s beloved late bloodhound, Ellie Mae, in the first chapter of the book and his current dog, Thelma Lou, in later chapters. When asked about opening the book with a bloodhound, Dietrich stated he wanted “her to have a part in the book.”

The author’s favorite ice cream flavor is one he used to concoct as a teen while working scooping ice cream. It’s apple cinnamon ice cream with Heath candy bars and crushed almonds.

Dietrich’s three favorite words in the English language are munificent, loquacious and prosaic, although he says you’ll never find them in his writing. These appeal to him because his father, who committed suicide when Dietrich was 12, used these words in conversation to help encourage his son’s love of language and writing.