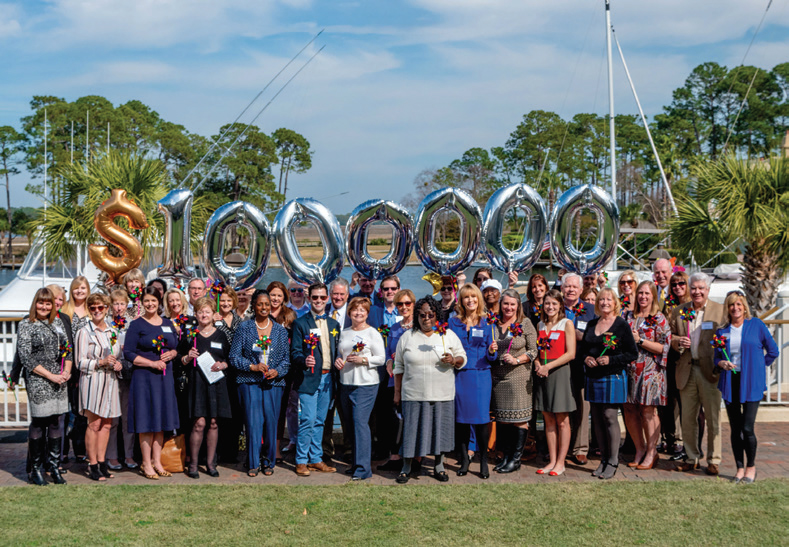 The Wexford Charitable Foundation has reached a million-dollar milestone, but the huge fund had modest beginnings.

Wexford resident Jim Hicks, who established the foundation in 2012, was inspired to create the foundation after he volunteered with the American Red Cross in Mississippi after Hurricane Katrina. “That experience taught me that anyone can make an impact when it comes to helping people in need. As a consequence, I realized that Wexford could make an impact by supporting local charities that are helping those in need every day,” he said.

Hicks, whose enthusiasm is palpable, gathered a small group of neighbors and persuaded the Wexford Homeowners Association to set up an independent entity and establish 501(c)(3) status for the newly formed foundation. These early trustees created the Founders Society and, with five-year commitments from Wexford donors, $400,000 was pledged.

“This is the most amazing place in the world for people who give their time, their energy and their resources to helping those in need,” Hicks said.

With a mission to support health, hunger, education and humanitarian charities, the Wexford Charitable Foundation initially focused on smaller agencies. Thirteen charities were supported in the first year with grants totaling $60,000. By 2019, annual grants totaling more than $200,000 were distributed to 32 local charities.

The foundation also celebrated a special milestone in February, when its total grants distributed reached $1.1 million.

While Hicks acknowledges that the success of the foundation owes much to the generosity of Wexford members and the dedication of the trustees and volunteers, his mantra has been that the “Wexford Charitable Foundation is in the business of taking fear and converting it into hope.” In addition to the board of trustees, more than 50 volunteers from within the Wexford community serve on numerous committees.

After leading the Wexford Charitable Foundation for six years, Hicks in 2018 passed the reins to current chairwoman Sue MacCormack, who previously served as treasurer. She points out that the foundation’s 3 percent administrative cost is significantly lower than many nonprofit organizations. Donations by Wexford members are supplemented by fundraising events and the generosity of corporate sponsors including South State Bank, Fidelity Investments, Broad Creek Marina and Ace Hardware. Each November, the foundation hosts a themed gala and auction to raise additional money.

Grant committee co-chairwoman Mary Reed is passionate about making sure that her team is focused on making an impact and meeting a need.

“Our Grants Committee does an exhaustive review of nonprofit organizations, predominantly in Beaufort County, and invites those selected to complete a grant application,” she said. The 12-member grant committee conducts site visits to evaluate the work of the charities, their management structure, the organizations and financial controls.

The scope of the Wexford Charitable Foundation’s giving is broad. Charities such as Sandalwood Community Food Pantry and Backpack Buddies have received sustaining grants, as have Pockets Full of Sunshine, Programs for Exceptional People, NAMI Lowcountry and Neighborhood Outreach Connection. In addition, the foundation has awarded major impact grants ranging from $20,000 to $100,000, including one that funded Hopeful Horizons’ new Bluffton satellite office. The foundation also awarded grants to Volunteers in Medicine to purchase much-needed equipment and to Family Promise of Beaufort County to acquire a bus to transport homeless families.

“While Hilton Head is well-known as an upscale community, a large portion of the population lives at or below the poverty level,” MacCormack said. “They may be homeless, do not have access to basic health and educational services, and in extreme cases live in abusive or dangerous relationships. The Wexford membership has said ‘not on my watch’ and has come together to make a difference.”

The $1 million milestone was achieved in less than seven years — a testament to the pioneering efforts of Jim Hicks and the Wexford members who care deeply about their neighbors and demonstrate this through their generous support of the Wexford Charitable Foundation.