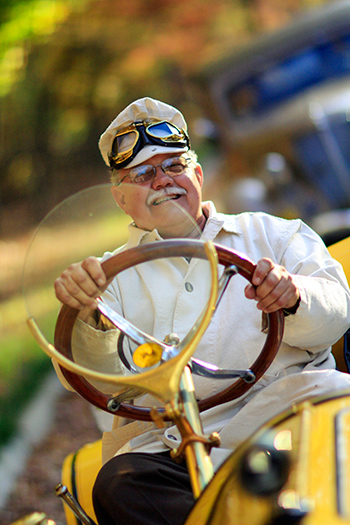 Every year, the Hilton Head Island Concours d’Elegance & Motoring Festival recognizes one collector for his or her continued participation and support. This year, that recognition goes to Paul Ianuario of Duncan.

Selected for his regular contributions to Concours, Ianuario has attended every event since the inaugural Hilton Head event in 2002, also frequently serving as a judge — including chief judge — and exhibiting vehicles. He joined Concours’ board of directors in 2017.

When he first got involved in Concours, Ianuario was an employee of BMW Manufacturing, responsible for running the Zentrum, BMW’s museum in Greer. He used his connections to get BMW involved in the annual Hilton Head event.

“Paul was instrumental in obtaining BMW as a founding sponsor of the event,” said Carolyn Vanagel, president of the Hilton Head Island Concours d’Elegance & Motoring Festival.

Ianuario — who has been collecting cars for 50 years — will showcase four cars from his eclectic collection, which includes cars from 1908 to 1972. Festivalgoers will be wowed by his 1908 Cadillac Double Tulip Touring, the first American automobile to win the prestigious Dewar Trophy. His 1908 Cadillac Double Tulip bodied Victoria Touring is the only one known to exist today.

He’s also showing a 1910 Chalmers Detroit. Only manufactured for two years, the model won 89 major competitions, including the 1909 Indiana Cup and the 1910 Glidden Tour. Collectors say that fewer than a dozen of the cars still exist today.

The third car, a 1912 Hudson “Mile A-Minute” speedster, is believed to be the first car built in America advertised as a “purpose-built race car.” Ianuario’s speedster is one of only five original remaining today; in 2011, he drove the car onto the racetrack at the Indianapolis Motor Speedway to mark the track’s centennial.

The final car Ianuario will display is a 1929 Packard 645 Dietrich Bodied Individual Custom Convertible Coupe, a one-off design by the incomparable Raymond Dietrich. It was built especially for Lloyd W. Smith, the CEO of what is now Chase National Bank. The Packard had a radio installed in it at the time of its manufacture, making it one of the one of the first automobiles with this accessory; it’s one of the earliest “superheterodyne” radios known to exist. This Packard’s custom body has never been removed from its chassis and it has only 31,000 miles.