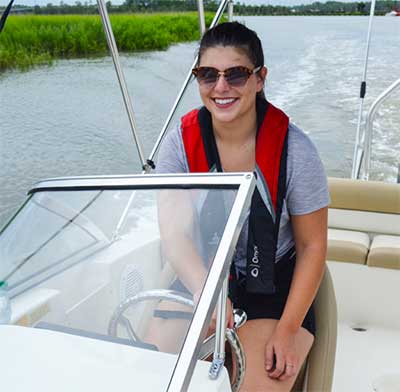 THE RIDE OF A LIFETIME WITH BOATUS

I recently had the chance to test-drive a few boats with BoatUS, the nation’s largest organization of recreational boat owners. In addition to selling boat insurance, the company also teaches boating safety courses and helps educates boaters on environmental issues. I was excited to get on board and get going.

When I arrived at the dock, instructor Tim McCarthy handed me a life preserver and we evaluated our options: A dual console, center console or deck boat. We climbed aboard the dual console and he showed me the basics on how to start the boat. I flipped the switch the lower the motor into the water — making sure that it was fully submerged — before turning the key. The low hum of the motor surprised me, as I had been expecting a loud roar. Instead, I told McCarthy, it was quieter than my car.

As we pushed off from the dock, Tim let me take the wheel, with a warning that at such a slow speed, it would be hard to make quick turns. We crept past other boats tied to the dock and, finally, past the no wake zone markers. Tim gave me the sign to give the motor a little more power, and we were off.

Though the dreary, windy weather kept us from gracefully cutting through the water, it was still an amazing experience. A group of dolphins followed alongside us, and Tim taught me about the different signs and makers that dotted the waterway. “Red right return” became my mantra — and for a girl from Wisconsin, it was strange to spend so much time focusing on where the sea was in relation to me. We wove around buoys — green on the right going out and red on the right coming in — and Tim pointed out interesting landmarks, like the house John Travolta recently purchased from Will Smith. The GPS tracked our path and the depth finder revealed shallow sandy spots hidden by the high tide.

Unfortunately, we had to cut our trip short as storms rolled in from every direction, sending us skipping over the water toward home. Nobody went overboard, but by the time we got back to the docks we were just as soaked thanks to the pouring rain.

Thanks to Tim and the BoatUS crew, I feel much more confident behind the wheel of a boat out on the open water and can’t wait to get out there again.