Can a shirt make you feel better about yourself? Hilton Head Island resident Heather Quinn and Jessica Berinato, her best friend of more than 20 years, say yes.

In March, the pair launched Heartward, a line of kids’ clothing devoted to promoting positivity and kindess. The brand’s shirts are made of durable, kid-tested fabric and feature designs relaying positive messages meant to inspire and encourage.

Just a few months in and the company is thriving, Quinn said. But the idea for clothing that could bring people together is an old one, she said — it dates back to the women’s childhood and a pair of dangly skeleton earrings.

“We met in third grade in the lunchroom,” Quinn said. “It was around Halloween and she had these awesome skeleton earrings, and I thought they were really cool.” 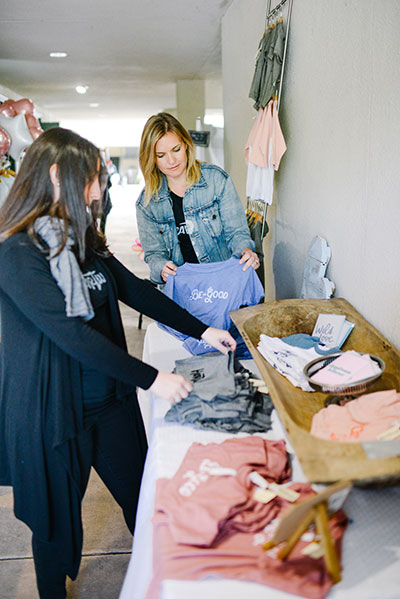 Bonding over their affinity for Halloween-themed jewelry sealed their friendship, and years later led Quinn and Berinato to found the Heartward brand.

The company’s name is a slight twist on the definition of “heartward;” the dictionary defines it as “directed or moving toward the heart.” But Quinn said the women chose the name because they wanted to move forward with their hearts — as evident by the sayings on their products, including “Be the good,” “Climb every mountain” and “Grateful life.”

Quinn often scribbles shirt ideas on Post-It notes that she sends off to Berinato’s husband, who is a graphic designer and turns the hand-written designs into the digital files used to create the final product. But the fabric and type of shirt must also be chosen, and for that, Quinn and Berinato turned to some experts: their own kids.

“We had the kids run around in them and then we washed and dried them because we’re moms and there’s nothing worse than buying something that shrinks up,” Quinn said. “We really put them through the ringer with our own.”

Berinato lives in Nashville and Quinn is on Hilton Head, but the pair has learned how to make the business run successfully despite the distance.

“We do a ton of conference calls,” Quinn said. “Some weeks we have like 10 conference calls a week. We ship a lot of things. It was a little tricky at first, but now we have it down to a science.”

And though the two friends have had to navigate the ins and outs of running a business together, they aren’t new to owning one. Quinn is the owner of Louette, a boutique on Hilton Head, and Berinato owns Breathless Paper Co., a greeting card and paper goods shop in Nashville.

Quinn said that she initially got a lot of well-meaning but skeptical advice about going into business with her best friend, but wasn’t never worried that the work would jeopardize their friendship. In fact, in some ways the business has brought them closer together — even though they are miles apart.

“We truly are like sisters,” Quinn said. “We’ve seen each other get married and have babies. We’ve also seen each other witness deaths in the family and all the bad stuff. She’s brilliant in business and I think it’s really great that we are able to do this together.”

Heartward items are available online at www.heartwardgoods.com and at Louette Boutique in The Village at Wexford on Hilton Head.