From tee to green, inside the ropes and behind the scenes, an army of volunteers is key to the success of the RBC Heritage Presented by Boeing.

For many of the 1,200 volunteers, the April event is a cherished opportunity for fellowship and to show their community pride and giving nature.

“The impact each volunteer has on the player, spectator and sponsor experience cannot be overstated,” said Tournament Director, Steve Wilmot. “RBC Heritage Presented by Boeing volunteers are rated among the best on the PGA Tour and are vital to the success of the tournament’s mission.”

The volunteer corps has its veterans. Among them: a retired banker from Virginia, a transplant from upstate New York and a retired educator from Ohio.

Taken together, they have more than 80 years of participation in the annual tournament. Here are their stories. 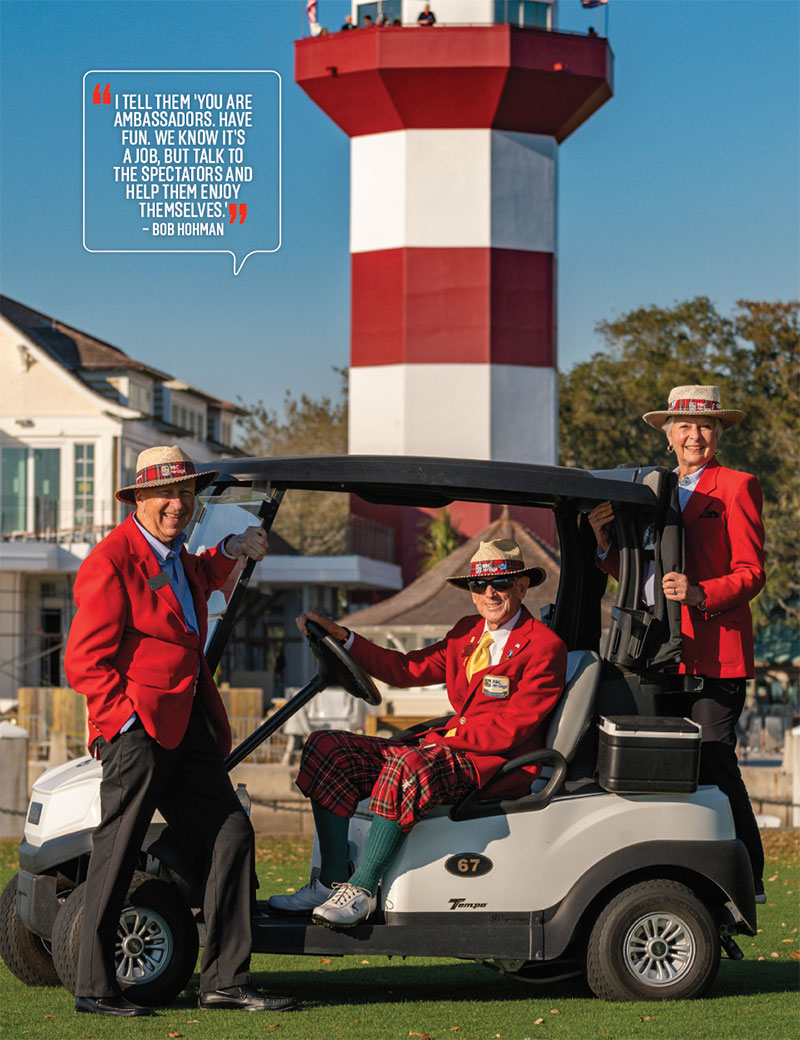 To say Marti Willits is all in for the RBC Heritage is an understatement.

Check out her license plate. A transplant from upstate New York who — like many others — fell for Hilton Head while on vacation, Willits once had a South Carolina license plate that read: “HR2Stay.” 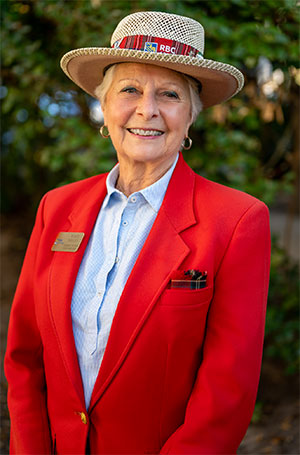 But after becoming a loyal Heritage volunteer, Willits replaced the catchy vanity plate with a plate featuring the tournament. (The plates are available through the South Carolina Department of Motor Vehicles, with a portion of the purchase donated to the Heritage Classic Foundation for charity scholarships).

“I like to volunteer,” said Willits, who has been a tournament volunteer since 1984, first as a marshal and, for the past quarter-century, as chair of what is now called the Location-Based Operator Committee.

Committee members deliver a high-tech touch to the tournament, using handheld tablets to locate and measure the length of shots and putts, and the distance remaining to the hole.

The information is relayed to broadcasters, scoreboard operators and the internet for worldwide distribution, Willits said.

“It needs to be quick and accurate,” said Willits, 81.

Willits said she looks forward to the annual tournament in part because volunteers have become friends over the years.

“They work hard, they enjoy it, and it’s always good to see old friends who come from all over at tournament time,” she said.

You’d think her chairmanship would provide an unmatched opportunity to watch the tournament. But her committee duties keep her hopping.

Most tournament days she doesn’t see much of the action until evening, when she watches televised delays.

“Until I fall asleep,” she quipped.

Familiar faces are to be found easily when the RBC Heritage comes to Hilton Head.

And a singular, familiar voice will be heard on the first tee. 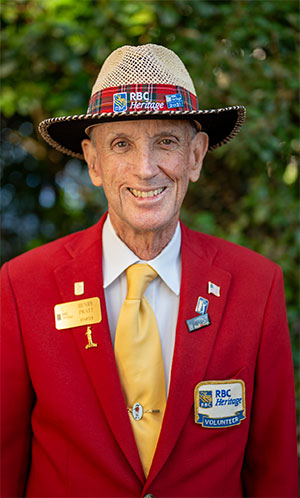 That’s the turf patrolled by tournament starter Henry Pratt, a Heritage volunteer for some three decades.

Decked out in his tartan jacket and knickers, Pratt is seemingly ever-present, calling out the names of tournament golfers, handing out their official scorecards and keeping things moving.

Pratt, 81, is a retired banking manager from Virginia who made Hilton Head home in 1990 after sampling island life while vacationing with his wife, Mary. Once settled as residents, the couple became Heritage Tournament volunteers, with Henry as an announcer, then a starter, and Mary as a scorekeeper until her passing last year.

Pratt, now chairman of the starter committee, has been such a stalwart that returning pro golfers have come to expect his warm welcome and resonant introductions.

Is there a favorite?

“I like ‘em all,” said Pratt, who said his main job is to treat each player with courtesy and consideration. “They all are good guys, and we want to make them all feel appreciated.”

Especially touring pros who have returned, time and again, to Hilton Head.

Pratt’s preparations include a review of each name to confirm the proper pronunciation and home, major championship victories, double-checking the condition of his trademark tournament jacket and knickers — and keeping his voice in fine fettle.

“I do have cough drops and lozenges just in case,” he said. “I try to stay healthy and get through the week.”

Pratt said he intends to be on his game – full-throated and fully prepared — to meet and greet players and spectators alike.

A warm memory surfaces when Bob Hohman pauses to reflect on his 26 years as a Heritage tournament volunteer.

In the calm of the day, between holes 16 and 17, Hohman was standing with pro Payne Stewart, when the quiet was broken by the “plunk” of a pine cone landing between the two men. 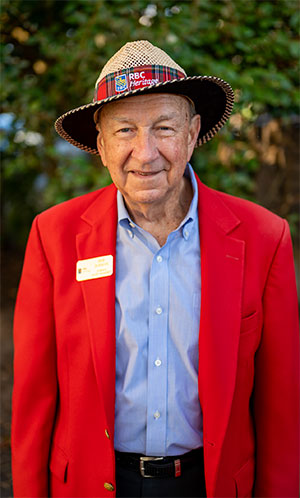 “Chicken Little,” said Stewart in a wry reference to the folk tale about a chicken who believes the world is ending when an acorn falls on her head.

For Hohman, the memory of Stewart’s quick wit is made more bittersweet by the golfer’s death in an airplane accident at age 42.

“That was all he said,” recalls Hohman, an Ohio transplant who came to Hilton Head in 1995 with his wife, Henrietta. Among the couple’s early actions as island newbies: signing up as volunteers for the Heritage.

Bob and “Hennie” became tournament fixtures. Bob wound up as chair of the Marshal’s Committee and Hennie as a volunteer in the children’s nursery for the families of touring PGA golfers. Hennie passed away in 2019.

“We wanted to get involved,” said “Dr. Bob,” a retired educator with a PhD in education administration.

Getting involved, it turned out, was a full-time endeavor for Hohman, whose Lowcountry activities included positions with the University of South Carolina Beaufort and ongoing work as an active board member of the Hilton Head Wine and Food Festival.

In his current role with the Heritage, Hohman directs some 440 volunteers — the largest group of tournament helpers.

Volunteers, who are expected to work a minimum of four shifts during tournament week, receive a one-hour training orientation, including a PowerPoint presentation of about 20 slides. Each day of the tournament, committee co-captains refresh the volunteers and follow up with reminders.

“I tell them ‘You are ambassadors. Have fun. We know it’s a job, but talk to the spectators and help them enjoy themselves.”

It works, he said, noting that volunteers — and spectators — are back at the Heritage, year after year.