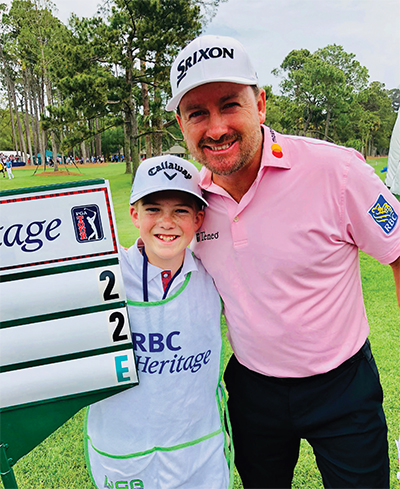 For every young golfer growing up in the Lowcountry — and there are plenty of them — the dream is to one day play in the RBC Heritage Presented by Boeing.

That goal is still a long way off for most students at the International Junior Golf Academy and those in the First Tee of the Lowcountry and PGA Junior League programs, but a handful of local kids get the opportunity each year to step inside the ropes alongside the pros.

IJGA recruits middle and high school students each year to serve as standard bearers at the Heritage, giving the aspiring golfers a chance to spend a round with the pros, carrying the signs that show the group’s scores. The gig isn’t an easy one — that sign is heavier than it looks, according to kids who have done it, and especially so by the end of a four-hour round — but it sure has its perks.

“You kind of get to hang out with the really good players, and they’ll kind of teach you some things,” said 12-year-old Jackson Arseneau of Bluffton. “And they’ll also give you stuff, which is nice.”

Jackson plans to volunteer for the third consecutive year at the upcoming Heritage, and he hopes to add to his collection of autographed memorabilia, which includes a few golf gloves, balls, and even a pin flag signed by U.S. Open champion Lucas Glover.

It’s standard for the pros to sign a keepsake for the young volunteers, but they also give them something else to take with them from time to time — a few pointers to improve their own game.

“It was a really great experience to be able to get up close with the pros and watch them go through their pre-shot routine,” said Cooper Todt, a sophomore on the golf team at Bluffton High School. “I could mirror what they do on the course in my own game to see if that works for me.”

Cooper volunteered for the first time last year and had the fortune of being paired with former Clemson star Sam Saunders, whose famous grandfather — the legendary Arnold Palmer — was the first Heritage champ and one of the sport’s all-time greats.

The experience left a mark on Cooper, who has since tried to model his game after Saunders.

“I liked the way he played,” he said. “His game was super smooth, and it looked fluid.”

In fact, the experience is largely responsible for Cooper not only sticking with golf, but also trying to take his game to the next level. He had only been playing for a short time and was becoming frustrated. But walking alongside the pros and seeing their even-keeled approach on the course helped him gain a greater understanding of the mental aspect of the sport.

“Before, I would go up and waste so much time overthinking the shot,” Cooper said. “After seeing Sam Saunders, I can see the shot before I take it and it goes much better for me.”

Michael Gavin, a 12-year-old Hilton Head Island Middle School student, had a similar takeaway. He has been playing since he was 4, but his first experience as a standard bearer three years ago motivated him to devote more time to golf in hopes of one day being inside the ropes with a club — rather than a scoreboard — in his hand.

Michael is only in sixth grade, but he’s already practicing with the Hilton Head Island High School team, and he’s using some lessons imparted from the pros to help him on the course.

“I’ve learned to keep my temper pretty cool and always find a way to come back, and that’s helped me in a lot of tournaments,” he said. “It’s also improved the time I put in for practice. I used to just hit on the range for 30 minutes and then putt for 15 and chip for 15, but now I’ve increased that time a lot more.”