Melvin Abel and Patrick Conley weren’t alone in their love for golf during April’s RBC Heritage Tournament, but their paths to get there certainly stand out.

Abel of Georgia and Conley of Florida didn’t know each other before their trip. But both had a special dream fulfilled through Wish of a Lifetime, a senior adult organization based in Denver. What's more--both Abel and Conley live on two different campuses of Brookdale, a senior living company which teams up with Wish of a Lifetime every year to send its residents to the Island's beloved golf tournament.

Wish of a Lifetime was founded in 2008 by Olympic skier, World Cup gold medalist and former NFL football player Jeremy Bloom in living honor of his grandmother. The non-profit has made more than 1,000 wishes come true for seniors in every state and from ages 65 to 110.

Abel, 87, had always wanted to go to a PGA Tour tournament. He grew up on a farm and caddied at the local country club. A perk of the job was that he could play golf for free when the club wasn’t busy. That started a lifelong love of golf for the Korean War-era veteran, who served in the U.S. Army 82nd Airborne Division. 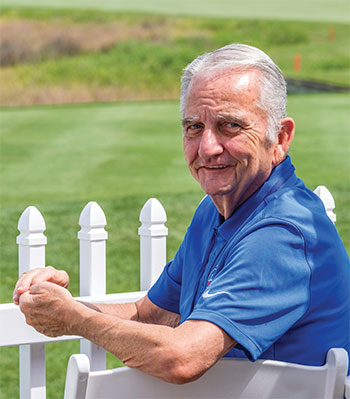 Conley, 70, took up golf at the age of 5 and was playing professional by age 19. As much as he loved the sport, it wasn’t a profession for a family man and he went into the lumberyard business. He eventually started his own lumber export/import business in Florida and became a consultant to Bosnia as the country rebuilt its lumber industry after the Bosnian War. His work earned him recognition from then-President Bill Clinton. Struggling with ischemic dementia, Conley’s memory now focuses only on his years of golf in Pittsburgh.

Both golf fans were accompanied to the Heritage by their daughters.

“Wish of a Lifetime’s mission is to shift the way society views and values aging by fulfilling seniors’ dreams and sharing their stories to inspire those of all ages,” said Sally Webster, the organization’s director of outreach. “We grant life-enriching experiences, such as reconnecting with their loved ones, helping seniors renew or celebrate their passions, or fulfilling a lifelong dream.”

To learn more about the organization, go to www.wishofalifetime.org.