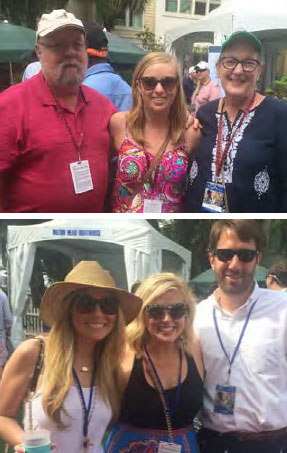 “Sure, the Heritage is an opportunity to walk around a pretty course with well-dressed people and once in a while a golf ball flies by,” said Peter Keber. “But I do it a little differently than most people. I’ve been going with my dad for the past 20 years and we follow the golf for the first three days. Of course, you can’t go past the 10th or 16th without getting stopped a million times and having a million conversations. It’s like the golf ‘barmuda’ triangle.” But on Saturday, when Keber’s dad is golfed-out, he enters fun strategy-mode. “You get there around lunch and time it with the food and cocktails, then do the loop going down the front nine and then the back nine, and then end at Harbour Town.”

“It’s one of my favorite times of the year,” said Angela McSwain, marketing director for the Heritage Classic Foundation. “And you don’t have to care about golf to enjoy the Heritage. You simply care about living here.” According to McSwain, the foundation has distributed more than $32 million to charities throughout South Carolina and Georgia since 1987, and since 1993, 267 high school seniors have received more than $3.7 million in four-year college scholarships. In 2015 alone, the foundation helped facilitate $2.6 million in donations, the Birdies for Charity program collected $230,000 in pledge donations — bringing the total to $5 million since it was created in 2000 — and the nonprofit groups that man the tournament concession stands made $187,973 for their charities. 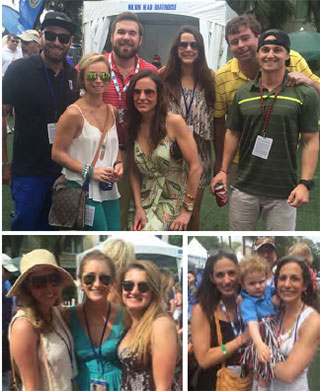 Overall, a 2010 Clemson Economic Impact study found that the tournament infuses $96 million into the state each and every year, according to the Heritage website.

Both McSwain and Keber regard the Heritage as a celebratory countdown to summer. “Everyone you haven’t seen all winter finally emerges,” Keber said. “And you see people you haven’t seen in years,” added McSwain.

Margot Brown, director of development and finance for Hilton Head Preparatory School, helps manage the Prep booth between the 17th hole and 18th green near the Grey Goose tent. “In addition to raising $25,000 to $30,000 for the school, Heritage is like a reunion for me,” she said. “You see someone one year and they are engaged, the next they’re married, and the next they have a child in a stroller. It’s fun to see the progression of life. It’s why we say, ‘Have a happy Heritage.’”