Nearly a quarter-century after it was abandoned by the U.S. Navy, the 2,801-acre Charleston Naval Shipyard on the Cooper River is being resurrected to become a “superbase” for the U.S. Coast Guard, thanks to a dredging project that will make the Port of Charleston the deepest harbor on the East Coast by 2021.

“Here we will homeport the most capable surface assets in our fleet, including five national security cutters and a complement of yet to be built offshore patrol cutters,” said Adm. Karl Schultz, commandant of the Coast Guard, in his 2020 State of the Coast Guard address Feb. 20 in Charleston.

The new facility could double the population of Coast Guard personnel in the Lowcountry to 2,000, turning Charleston into a Coast Guard version of Navy “superbases” at San Diego and Norfolk, Virginia. Three cutters — the cutters USCGC James and USCGC Hamilton, and buoy tender USCGC Willow — are already stationed in Charleston. 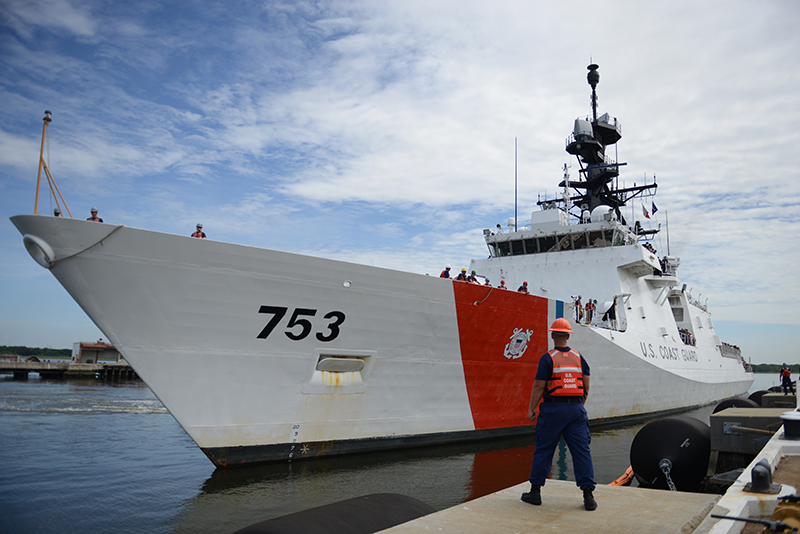 “A community like Charleston understands just how important our defense contributions are to the nation. And for generations, the people of this great port city have also appreciated the importance of maritime commerce to our nation,” Schultz said.

Established in 1790 by an act of Congress, the Coast Guard is tasked with homeland security missions including immigration control, the prevention of drug trafficking and the security of ports and waterways, as well as non-security tasks such as ice operations, fisheries enforcement, environmental protection, navigation and search and rescue. With a 2020 budget of $11.3 billion, the Coast Guard currently has about 41,000 active-duty personnel, 7,000 reservists and more than 8,500 full-time civilian employees on its payroll.

The Charleston Harbor dredging project will deepen the main channel to 52 feet from 45 feet, and the entrance channel from 47 feet to 54 feet when completed in 2021, according to South Carolina Ports. The South Carolina General Assembly earmarked $300 million and the federal government has provided $246 million for the project, which then-President Barack Obama placed on a list of “We Can’t Wait” initiatives in 2012. Work began in February 2018.

“Charleston is a strategic port. It is why the U.S. Navy commissioned the Charleston Navy Shipyard in 1901, operating the yard until 1996,” Forbes magazine national-security correspondent Craig Hooper wrote in February. “The Navy’s departure left a large strategic gap in America’s maritime readiness, but the Coast Guard — which has long recognized the strategic importance of being where the Navy is not — is moving in, advancing Charleston’s outsized contribution to the national security of the United States.”

According to a U.S. Army Corps of Engineers impact assessment, the dredging project will allow salt water to encroach further up the freshwater Ashley and Cooper rivers, but will have only minor impacts on the ecosystem.

“For wetlands in the tidal freshwater area of impacts, minor salinity changes would only cause extremely minor changes in vegetation composition or structure,” according to the report, resulting in the replacement of some freshwater plants with salt-tolerant species such as spartina, also known as cord grass.

However, the assessment also found that rising sea levels due to climate change are likely to have much more impact over time, converting some coastal wetlands into shallow, open-water habitat.

Under the high sea level rise scenario in 2071, only 5% of the salinity impacts are predicted to be attributable to the (dredging) project,” according to the assessment.