ARCHAEOLOGY PROJECT HOPES TO FILL IN GAPS IN HISTORY

As a child growing up on Hilton Head Island, Thomas Barnwell Jr., saw his dad let people break off souvenir pieces of a tabby ruin that sat, crumbling, on their Squire Pope Road property. Today, the University of South Carolina Beaufort and the Barnwell family have partnered in an archaeology project that sees the tabby ruin as a key to the past.

The Barnwells, who have lived on the island for four generations and are descendants of enslaved people who worked on the property, didn’t know much about the ruin. As is the case for many descendants of slaves, there are gaps in their family history and genealogy. The structure is located on private property that was probably once part of Cotton Hope Plantation, and before that, Skull Creek Plantation. They know that it’s made of tabby — a composite building material made of shell, lime, and sand that has been used over the last 400 years — but that’s about it. As a child, Barnwell didn’t agree with his father letting people damage the building for souvenirs, and now that he’s an adult, he’s taken steps to preserve the structure.

He had it partially restored and covered with a roof, a process that started over 10 years ago. With the assistance of the Heritage Library on Hilton Head Island, he and his family have partnered with the University of South Carolina Beaufort’s Students Connected program to research the building’s history, hoping to determine when it was built, what purpose it served, and how his ancestors might have been involved.

In the spring and summer of 2019, USCB anthropology professor Dr. Kimberly Cavanagh and her students spent almost every weekend excavating at the site. Inside the building, the students removed layers of soil covering a prepared cement floor and sifted through this fill. They found pieces of charcoal, animal bones, and a handful of glass and pottery fragments. Excavations in the center of the ruins uncovered a thick layer of tabby and lots of charcoal, suggesting that there might have been a hearth. All the artifacts they found are being processed and analyzed for clues.

In addition to the excavation site, they’re searching historical archives for information about earlier plantations thought to have existed there. 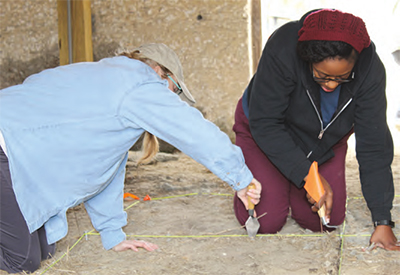 Nelson collected samples from various locations within the ruins and used a lab technique called optically stimulated luminescence to determine when the quartz sand grains in the samples were last exposed to sunlight. These test results and Plaag’s preliminary archival research suggest that the tabby ruins date from an earlier period than originally believed. The ruins may date from the island’s colonial period, but more archival research and analysis of the artifacts are needed to confirm this hypothesis.

In addition to the Barnwell family’s contributions, other support for the project has come from Community Foundation of the Lowcountry, the Seas Islands Institute at USCB, the University of South Carolina, a Hometown Humanities grant and the South Carolina Humanities Council.

The ultimate goal is for Barnwell and the research team to be able to share what they learn with the community. Last spring, USCB conducted several school field trips to the site, where kids learned about the tabby ruin and got to help with the excavation. With guidance from the Barnwell family, Cavanagh and Dawson intend to develop a traveling educational exhibit and a digital archive based on the excavation.