BLUFFTON IS THRIVING, BUT GROWTH GETS MIXED REVIEWS

It’s no secret that the town of Bluffton is experiencing a growth spurt. In the late 1990s, it was a 1-mile hamlet with fewer than 800 residents. Today, it’s 54 square miles with a population estimated at more than 23,000.

Its growth is only going to continue. Bluffton is only 44% built out and, when all is said and done, its population might reach 75,000, according to town officials.

Growth was ineveitable once Hilton Head Island became a world-class vacation destination and Sun City Hilton Head was permitted and began attracting retirees, say current and former elected officials.The question was: Who would control it?

“If this train is coming through the county, it’s best that we’re the engine of the train, not the caboose,” said Emmett McCracken, who served as mayor of Bluffton and a member of Town Council during in the late 1990s through 2004. 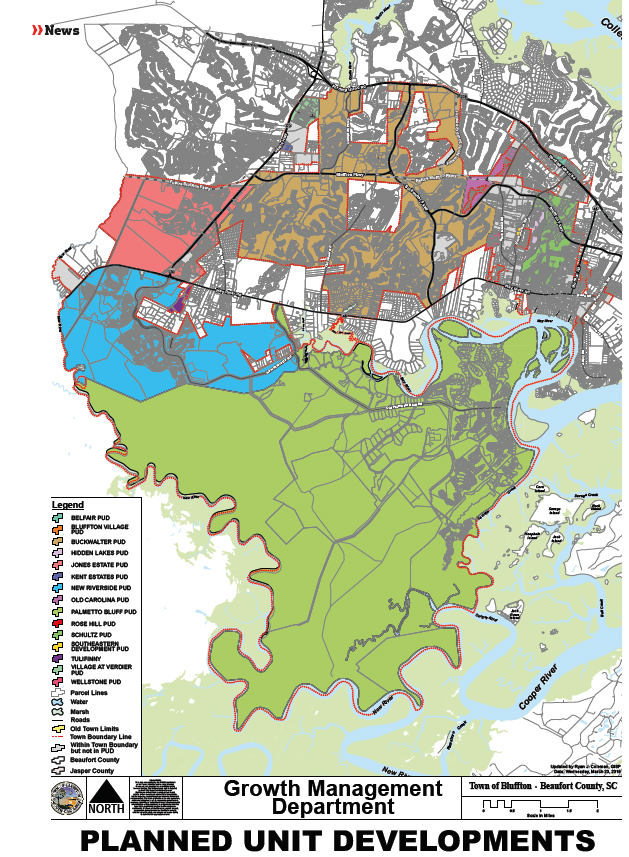 Much of the land that is now part of the town of Bluffton was formerly in unicorporated Beaufort County. From 1998 through 2002, Bluffton annexed huge tracts, including Palmetto Bluff in 1998. At 20,660 acres, Palmetto Bluff is about the size of Hilton Head. State law says that annexation can only occur in areas contingent to existing municipal boundaries and at the request of landowners. Developers viewed Bluffton as a more receptive and agile partner in their plans to build homes and commercial centers in a robust real estate market fueled by the growing popularity of coastal regions. Town officials were looking to increase their tax rolls and have more say in their region’s destiny. It was a marriage of convenience and of opportunity.

Former Bluffton Mayor Hank Johnston, who headed the town from 1998-2008, was in the thick of the annexation process.

“If we don’t take control of that development and planning, then we’re going to be sitting here surrounded by what the county has done,” he said. “We need to control our own destiny.”

Other planned unit communities that sit on annexed land include the Schultz tract, 620 acres that are home to the Bluffton Park neighborhood and Oscar Frazier Park; Bluffton Village, 29 acres that include the Bluffton post office and library; 5,600 acres along Buckwalter; the 4,400 acres of the Jones Estate; New Riverside’s 4,006 acres; and Village at Verdier, which includes 125 acres. Within these areas are neighborhoods including Cypress Ridge, Hampton Lake, Alston Park and The Farm. Smaller annexations continue.

These large tracts of land had often been owned by paper companies, which decided there was more money in real estate than in timber and sold the properties to developers. The developers then approached the town with plans to build.

At the time, town officials and staff agreed that suburban sprawl, with its associated dependence on vehicular traffic, was not the goal.

“We were willing to sit down at the table and develop master plans,” Johnston said, which is why developers came knocking. “At the time, our vision was that Bluffton would be a series of villages connected by Bluffton Parkway. There would be a Village of Old Town, the Village at Buckwalter, Village at Jones Tract. You’d have everything in those villages to serve the people living there within 10 minutes.”

The developer agreements range from 15 years to 40 years and detailed “what the developer can build in terms of structures and density,” said Mayor Lisa Sulka, who was first elected in 2004 to Bluffton’s Town Council. The benefits to the town from these contracts included administrative fees, land donations, easements for future roads, public parks and open space, land set aside for schools, and other community assets, she said.

On top of the development agreements are master plans for each neighborhood, “detailing the residential lot layout, commercial buildings, open space, buffers and various amenities,” said Debbie Szpanka, public information officer for the town of Bluffton. For example, the master plan for Cypress Ridge calls for more than 1,800 homes, while The Haven at New Riverside calls for 555.

WHERE IT GOES FROM HERE

The Great Recession in 2009 put many of these projects on hold. Now, with the national and local economies recovered, construction has returned and the impact of the development agreements is being realized. Construction permits have been on a steady climb since 2012; in 2018, 807 permits were issued for new residential housing and 58 for new commercia buildings. As of Nov. 30, the town had issued 592 permits for new residential buildings and 36 permits for new commercial construction, a total value of just under $331 million.

With this growth, of course, comes a downside: More traffic, crowded schools, gentrification, and an impact on the fragile Lowcountry environment, including the tree canopy and May River.

“The pace of growth is difficult to control through the terms of the existing development agreements,” Sulka said. “Further, as Bluffton evolves, the development agreement provisions remain intact, with little room for unilateral revisions, unless the property owner and town mutually agree. Significant community concerns and Town Council priorities remain on the health of the May River and surrounding watersheds, available major roadway funding and public facilities. The agreements, as written and adopted more than 15 years ago, remain void of solutions to these significant community issues.” How to both protect the May River watershed while also accommodating growth will be one of the town’s greatest challenges.

In November, voters overwhelmingly passed a $290 million bond measure — the first since 2008. These new bonds will fund the construction of 16 new classrooms at River Ridge Academy and a 23-classroom, two-story addition at May River High School.

As Bluffton grows, so will the schools. “We will continue to monitor Bluffton growth and report to the board on the expected impacts to the school system,” said Robert Oetting, the school district’s chief operations officer. And for the first time, he added, Beaufort County is “working with the school district on establishing impact fees for all new developments in the county, but those fees are not currently in place.”

Meanwhile, the town of Bluffton wants to make sure the once-sleepy Southern hamlet retains its charm and livability even as it grows. The town has acquired land to create more open spaces, added parking throughout the Historic District (most recently at the former CrossFit 843 site on May River Road), converted properties to passive and active parks, restored historic homes, and completed the May River Road and Dr. Mellichamp Drive streetscapes.

Residents have taken notice of the town’s transformation.

“I grew up in Bluffton and it doesn’t seem like the same town,” said James Lamont, 37, who works in landscaping. “Some things are worse, some are better. But mostly it’s just a completely different thing now. I can’t even imagine it’s going to get bigger.”

Coming next month: Part 2 of our Bluffton series: “How is growth affecting the May River?”