Denise K. Spencer was honored at a retirement party April 9 at Sea Pines Country Club. Spencer served as president and CEO of Community Foundation of the Lowcountry for more than 12 years. Under her leadership, the group more than doubled its combined assets to more than $72 million. She also was instrumental in developing the partnership to give all Hilton Head Island residents access to public sewer as part of the Project SAFE initiative.

The town of Bluffton has partnered with the Lutzie 43 Foundation, a nonprofit organization that encourages young people to practice safe driving. Its 43 Key Seconds Initiative — which includes “Clear Head, Clear Hands, Clear Eyes and Click It!” — emphasizes the first 43 seconds after drivers enter their vehicles. Mike Lutzenkirchen, the founder of the Lutzie 43 Foundation, accompanied Bluffton Mayor Lisa Sulka and Bluffton Town Council members at a news conference where he explained that he started the foundation after his son, Auburn University football player Phillip Lutzenkirchen, was killed in a car accident. Lutzenkirchen also told Bluffton High School juniors and seniors at a school assembly that he, his wife and two of his three daughters found out about Phillip’s death after pulling into their driveway and seeing a sticky note on their door.

“I watched my wife dropped to her knees,” he told the students. “In life, there are intentional decisions and unintentional results” 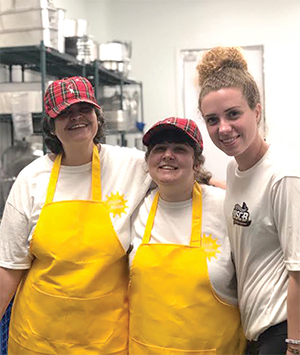 Pockets Full of Sunshine, a local organization that helps adults with disabilities in the Lowcountry, was one of two winners of the inaugural RBC Heritage cookie contest. Members baked M&M and peanut butter cookies at the University of South Carolina Beaufort’s Hilton Head Island and won the opportunity to have their winning cookie sold at the tournament. Pro golfer Jim Furyk visited the group as they baked their last batch.

Construction firm owner Chris Tilton has launched a monthly podcast featuring local stories of inspiration, kindness and positivity. His firm, Dewitt Tilton Group, will reward people who help find these stories with a $300 donation to the charity of their choice.

The podcast is Tilton’s way of doing good in the community. Simple but true stories, he thought, could inspire others to perform random acts of kindness. To submit story ideas, email dtg.inspire@gmail.com. One story will be selected each month to be featured on the podcast.

The podcast can be accessed at YouTube, Apple Podcasts, Spotify, Google Play, Stitcher, and everywhere else podcasts can be found. View the first episode at youtube.com/watch?v=1EgdS0dh9UY.

Local boat owners can have their boats inspected and receive a 2019 Safety Decal from the Coast Guard Auxiliary. The decal notifies both the U.S. Coast Guard and the South Carolina Department of Natural Resources that the vessel has complied with regulations, often eliminating the need for a random safety stop on the water. 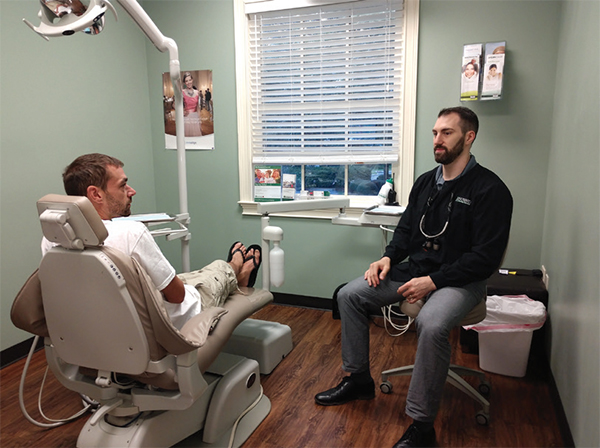 Dr. Adam Squicquero and his team at Howard Family Dental in Bluffton donated $75,893 in dental services to the winner of The Smile Makeover contest. Howard Family Dental asked Bluffton residents to nominate a deserving mother or father in the spirit of Mother’s and Father’s Day. Charlie Card, a local Bluffton father, was chosen out of over 45 nominations and received 28 crowns, eight implants and four root canals over eight visits. Classic Craft Dental Lab, Charleston Oral & Facial Surgery and Implant Concierge also donated their services.

United Way of the Lowcountry has opened the next funding cycle for local nonprofit groups working in the areas of education and health. This year there are changes in the financial threshold requirements. For more information or to apply, visit uwlowcountry.org. United Way’s Community Impact Committee is also looking for volunteers to help visit, report and evaluate agencies and programs that serve residents of Beaufort and Jasper counties. For more information, call 843-379-3067. 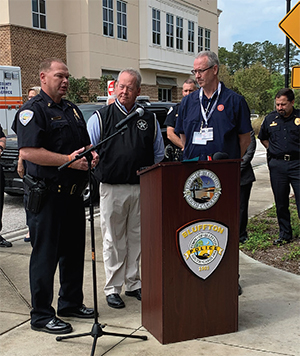 The Citadel Graduate College has launced a new master’s program in military history. The 30-hour online program kicks off in fall and provides an advanced historical study of the theory and practice of warfare, the institutions and operations of military forces, and the impact of militaries and warfare on societies. For more information, call 843-953-5073 or go to citadel.edu/root/military-history.

Generosity is one of the best things about the Lowcountry. Has your business or organization given back to the community? Submit your photos to editor@hiltonheadmonthly.com for this section. Space is limited.