Recently my wife, Amanda, and I celebrated my son Boone’s first birthday. As any new parent will tell you, his first year was a whirlwind, complicated by our rather unique circumstances. Amanda found out she was pregnant the day after I announced I was running for Congress. Boone arrived two weeks early, on a day that I had planned to be in Beaufort for three different campaign events. 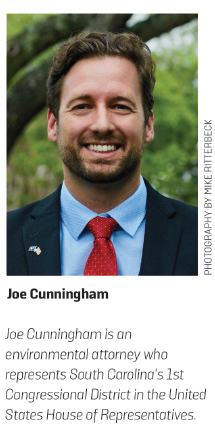 I’ve been reflecting on the kind of world I want to leave my son. I was an Eagle Scout growing up, spending most weekends camping or hiking outdoors. It was my love for the ocean that led me to study ocean engineering in college; I wanted to continue to be near the water and help preserve it for future generations. As a new congressman and a new dad, I want to protect our vibrant natural resources, and I’m keenly aware of the effect of climate change — especially in the Lowcountry, where we feel the impact of rising sea levels, flooding and harsh storm systems firsthand. Climate change is urgently serious, but I am hopeful that it’s a problem we can tackle together.

Republicans and Democrats here all recognize that our natural resources define the Lowcountry. That’s why we have stood together against the threat of offshore drilling and seismic air-gun blasting. We know that risking our thriving tourism, recreation and fishing industries to oil exploration could have devastating economic repercussions that would be felt around the state. I applaud S.C. Attorney General Alan Wilson for joining the federal lawsuit against offshore drilling, with the support of Gov. Henry McMaster. I am encouraged action from the state legislature to block the onshore infrastructure needed to conduct offshore drilling. And I am honored that I was joined by a bipartisan group of coastal mayors and state representatives when I introduced my bill to place a 10-year moratorium on offshore drilling during my first week in office.

I believe the only way to tackle the serious environmental problems facing South Carolina is to work together. Historic flooding has inundated South Carolina from the Lowcountry to the Upstate as a result of unprecedented high tides, erosion, storms, and hurricanes. I was invited by Gov. McMaster to join the bipartisan S.C. Floodwater Commission to examine our flooding problems, and I look forward to working alongside local leaders to address the crisis and make sure federal funding is allocated to South Carolina. I am also encouraged by the bipartisan support in the U.S. Senate to reauthorize the Land and Water Conservation Fund with the help of Sen. Lindsey Graham. LWCF invests in local parks, trails, public lands and outdoors spaces in communities across the country — and enriches the lives of hundreds of thousands in South Carolina. I look forward to getting it swiftly through the House and onto President Trump’s desk.

I am constantly inspired by the people in the Lowcountry who are taking action to protect our environment: Queen Quet Marquetta Goodwine, chieftess and head-of-state of the Gullah/Geechee Nation on St. Helena Island, just testified before Congress on the impacts of climate change on coastal communities. The James Island Ocean Actkidvists — Betty, Louis, Mekena and Liam — have made it their mission to protect our oceans and marine life from plastics pollution and to educate the Lowcountry on the dangers of single-use plastics. As a former ocean engineer and a young dad, it's heartening to see the next generation of scientists, activists and leaders speak out to protect our oceans. It's everyone’s job to preserve our natural resources and I am honored to do my part in Congress.