Ben Hughey has always been an animal lover.

Beyond his love of music — he’s the lead singer and guitarist of Naytiv — it’s the thing the Hilton Head Island teenager is perhaps best known for. On his Facebook page, he even posted a photo showing the image of a cat’s face over his heart. So when a friend noticed a stray cat wandering around the NAMI parking lot on the island’s north end, Hughey was the first person to come to mind to help.

“My friend tagged me in a post on Facebook about this cat in a parking lot,” Hughey said. “I said ‘I’m gonna pick this cat up and give it a home.’”

He named the feline Moon Pie, a nod to its black and white fur and the fact that Hughey is a fan of the snack treat. And, in an effort to be a responsible pet owner, he made an appointment with Palmetto Animal League’s Community Clinic to ensure his new companion was up on all of his shots. 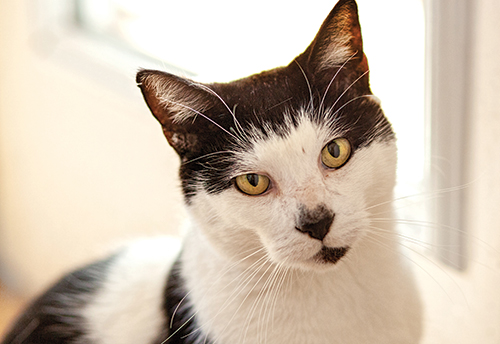 The clinic requires cats arrive in a pet carrier, but Hughey didn’t have one — a minor setback that would lead to a major surprise.

“I carried him in my arms,” Hughey said, “and as soon as I walked in, the receptionist looked at him and said, ‘Lincoln?’”

The cat in Hughey’s arms, the one he had rescued from a parking lot on the north end of the island and named Moon Pie, had gone missing from the Yacht Cove home of Heath and Linda Prosser nine months earlier. Working the reception desk at the animal clinic that day was the Prossers’ niece, Sarah Mae.

“So many things had to happen that day. If he had brought the cat in in a carrier, I never would have seen it,” she said.

Indeed, had anyone else been working reception that day, the cat might have gone unrecognized. “The other crazy part is that when my aunt and uncle adopted Lincoln, they also adopted his sister, Mercedes,” Mae said. “I had Mercedes in a carrier with me that day.”

Positive she was looking at the same male cat that had slipped away from her aunt and uncle’s place nine months earlier, Mae scanned the cat’s microchip, compared it with photos and let him interact with his sister. Sure enough, it was a match.

“It’s crazy. This doesn’t happen to people like us; this is something you see in a movie,” Mae said.

Lincoln the cat, whose family had placed missing pet posters all over Yacht Cove as they searched for him, completed a nine-month journey to the north end of the island and returned home under the unlikeliest of circumstances.

His journey over, mysteries still remain — for example, how the whole thing began in the first place. Mae said that Lincoln was very bonded to her cousin, Jacob, the Prossers’ son, who had left to hike the Appalachian Trail shortly before his cat started its own journey.

“When Lincoln disappeared, we figured he was out looking for Jacob,” Mae said. “We don’t know how he wound up on the north end … We figured after a few months, he’s so friendly and he’s an indoor and outdoor cat, it wasn’t outside the realm of possibility that he’d moved in with someone else.”

When the Prossers adopted Lincoln from Hilton Head Humane Association, the cat had been microchipped, but the Prossers’ phone number had changed since then. Eventually, the family had no choice but to accept that their cat was gone. They had given up hope of find him — right up until the moment Ben Hughey carried Lincoln in his arms into PAL’s clinic.

Hughey was heartbroken to give up his new friend, but was glad Lincoln’s story had a happy ending. And it turns out his did, too.

“I was really sad about it at first, but we were at Palmetto Animal League and there’s an adoption center next door. I went next door and adopted two kittens the next day,” Hughey said.

“Not only did he rescue Lincoln, he rescued two other cats,” Mae said. “He’s an incredible young man.”

Hughley named his new furry friends Hanz and Leo, after composer Hans Zimmer and actor Leonardo DiCaprio. And every once in a while, he still drops by to visit his pal Lincoln, back home with his original family following an incredible journey.