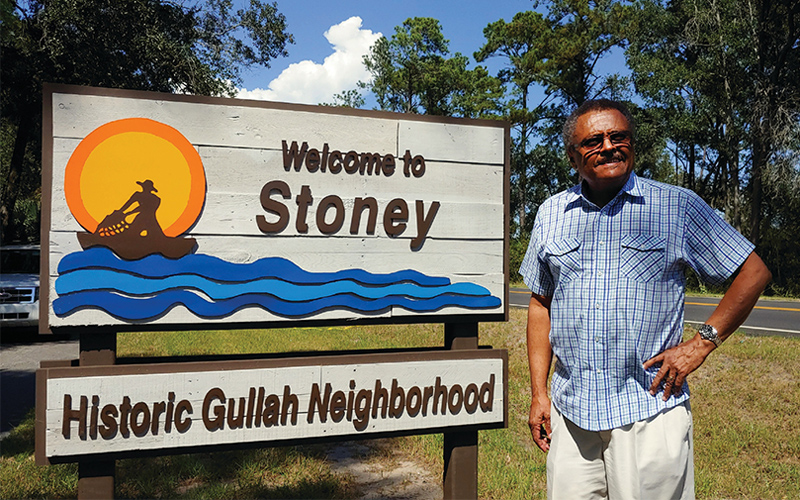 Only the people who lived in them, mostly on family-owned land in the middle and northern parts of the island, knew the boundaries of their neighborhoods: Big Stoney, Little Stoney, Squire Pope, Jarvis, Jonesville, Spanish Wells, Gardner, Marshland, Chaplin, Grassland, Big Hill, Baygall and Mitchelville.

Today, decades after Hilton Head became a world-class resort destination, these communities are being identified by signs that greet those coming onto the island, marking Gullah history and its place on the island.

Many of these neighborhoods once made up the Town of Hilton Head Island’s Ward One, although parts have been partitioned into other wards. Other than being identified as Ward One, there were no formal landmarks bearing the names of these Gullah neighborhoods, said Murray Christopher, a Hilton Head native who worked with town planning staff and the Native Island Business and Community Affairs Association to place signs in each neighborhood.

The idea for the signs emerged as a recommendation over the years in town planning reports and from community leaders seeking ways to better identify Gullah communities.

“These signs were important. All of the planned communities were identified and Ward One was a blanket area that had no distinct boundaries,” Christopher said. “No one knew where they began or ended or if they existed. They were all just lumped into Ward One.”

Now new and longtime residents, younger generations of Gullah and even tourists will be able to find some of the island’s oldest neighborhoods, Christopher said. These neighborhoods developed around what essentially were family compounds, where one family owned parcels of land and other family members over time would inherit the homesteads, he said. And they reflect Hilton Head Island’s Gullah culture, defined by descendants’ African ancestry, food, language and other ways of life.

“Like many historic structures and sites, these signs will help educate both visitors and residents about these communities and encourage them to learn more about these areas,” said Jayme Lopko, a senior planner with the Town of Hilton Head Island.

Lopko said the town took on the project to not only support preservation of the historic Gullah neighborhoods and culture but to support Town Council’s heirs property initiative and the efforts of its Gullah-Geechee Land and Cultural Preservation Task Force. In May, the town voted to spend $15,000 for 12 signs in the first phase of the project, to include construction and installation of and the legal costs for acquiring an easement on private property. More signs, if needed, will be added later.

Lopko worked with NIBCAA to identify the appropriate locations in each community to place the signs.

Made with reclaimed woods, the signs feature elements of NIBCCA’s Gullah Celebration logo and its orange, brown and blue colors. The goal was to tie together efforts to preserve Gullah culture, including the story of Mitchelville, Christopher said. Mitchelville carries the distinction of being the first post-Civil War town for freed slaves, with a government structure led by and administered by former slaves. Many native island families can trace their roots to Mitchelville.

“All of this is just the Mitchelville story being continued,” Christopher said. “You can’t embrace Mitchelville and leave out the other communities.”