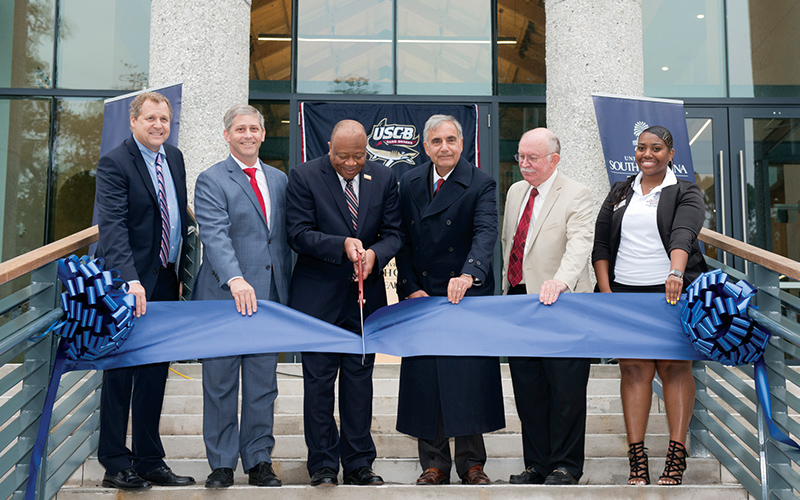 For years, Hilton Head Island has repeatedly been named as one of the best island destinations in the world, earning praise for its world-class resorts, amenities and service.

Now, students at the University of South Carolina Beaufort can learn the art of hospitality from the masters themselves, right in the heart of the island.

In November, USCB unveiled its new Hospitality Management Campus near Sea Pines Circle. The $25 million, 40,000-square-foot facility includes a main building that better resembles a conference center than an academic hall thanks to its tabby columns, soaring atrium and exposed wood — all overlooking a lush lagoon that backs up to the Sea Pines Forest Preserve.

The campus has eight classrooms, including two a beverage/bar laboratory and a demonstration kitchen. There also is a fabrication laboratory where students will create high-quality marketing materials. Office Park Road, which leads to the campus, has been renamed Sand Shark Drive as a tribute to the USCB mascot.

Currently, there are about 100 juniors and seniors in USCB’s hospitality program, with 400 expected to enroll within the next two years. Classes will begin at the Hilton Head facility in January.

The campus was designed and built by award-winning Liollio of Charleston and Fraser Construction, a general contractor headquartered in Bluffton and headed by Joseph B. Fraser III. Wood + Partners Inc of Hilton Head provided the landscape architecture.

The project was personal for Fraser — in the 1970s, his father, Joseph Bacon Fraser Jr., had an office in the former Sea Pines Company Executive Building that once sat on the site. Joseph Fraser Jr. and his brother, Charles, were co-founders of Sea Pines and often are credited with helping to put Hilton Head on the map as a vacation destination.

Fraser said he was “very humbled” to have been part of the construction of the new building — and thinks his family would be pleased with efforts to uphold its legacy of environmentally conscious design that blends into the surrounding natural areas.

“There is a lot of nature blending with the tabby, brick and wood features,” Fraser said during the ribbon-cutting ceremony for the new building. “Yet the contemporary feeling is evident, and I believe it is one of the finest new university buildings in our region.”

USCB officials also are excited about the opening of the new campus. Dr. Harris Pastides, president of the USC system, was among the featured speakers at the ribbon-cutting ceremony. He pointed out that tourism and hospitality have become a $21 billion-a-year industry for South Carolina, employing one out of 10 workers.

"I expect that as the reputation of this particular campus grows, there will be students coming here from across the nation," Pastides said, noting that USCB is already fielding transfer requests from students wanting to enroll in the hospitality program.

Sandra Moore, a sophomore hospitality student, said she is excited about the Hilton Head campus because it means the school can “have local resort and restaurant management come meet with us and give us specific hands-on guidance.”

“A campus like this can be transformative for the education of our students because they can put theory to action by being able to step into part-time jobs in the local hospitality workforce,” said Charles Calvert, dean of the new campus, adding that the hospitality management program will not hold classes will on Fridays to encourage students to get jobs in the industry — a win-win for everyone. “Students will earn money to help pay for their education and the hospitality industry, which desperately needs workers, will have eager young people to work." 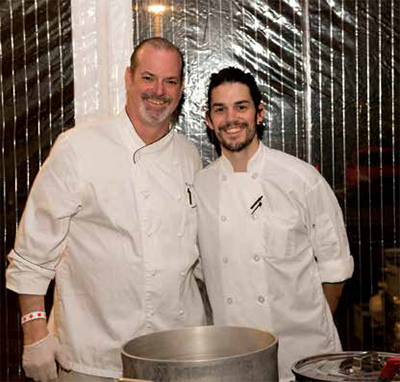 S.C. Rep. Jeff Bradley, whose district includes Hilton Head, thinks the new campus will be a major benefit to the island’s tourism industry. In addition to hosting the Center for Event Management Hospitality Training and the Lowcountry Resort Islands Tourism Institute, which will provide vital information to Hilton Head businesses, the school will impact the region’s economy.

“When you look at the number of restaurants we have on the Island and the hospitality industry as a whole you can see the dependence our economy has on tourism excellence,” he said. “Anytime you can raise the value of the people working in an industry, it can't help but improve things."