TROLLEYS ROLLING OUT ON HILTON HEAD THIS SUMMER

Pump the brakes, bicyclists and golf cart drivers. There’s a new way to get around Hilton Head Island: Old-fashioned trolleys will hit the road this summer to help ease traffic.

Known as The Breeze, the trolley service will pick up its first passengers this month. Initially, two trolleys will be in circulation and will feature Wi-Fi, GPS tracking, bicycle racks, mobile apps, space for wheelchairs and strollers, and air conditioning. A third trolley is expected to join the fleet later in the summer.

The trolleys are operated by the Lowcountry Regional Transportation Authority, the same agency that runs the Palmetto Breeze buses. In partnership with the Town of Hilton Head Island, the service is designed to offer a fun and convenient transportation alternative while decreasing island traffic. 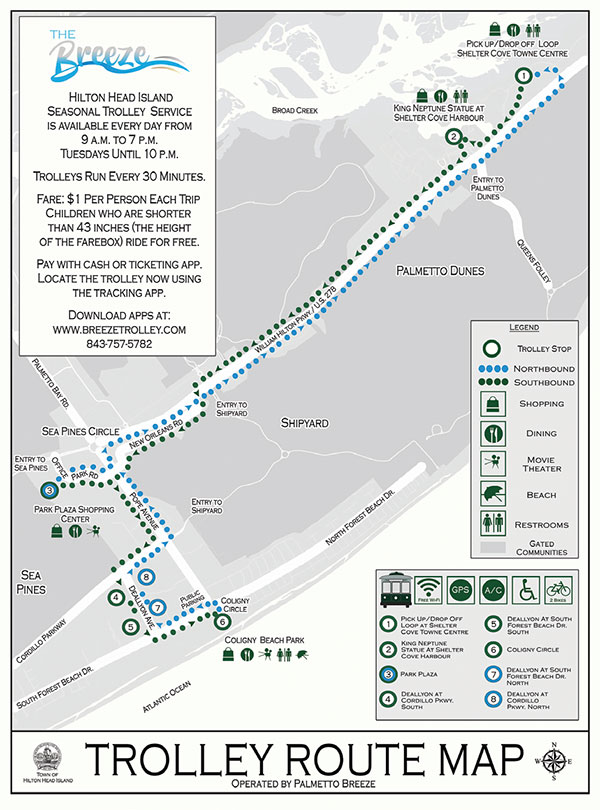 A ride aboard the trolleys will be $1, but children under a certain height will ride for free.

“We want to enhance the island experience for our residents and visitor,” said Hilton Head town manager Steve Riley. “The trolley service will take some of the traffic burden off the roadways and help people get around the island during peak hours.”

The trolleys also offer a glimpse at the island’s history; the first two trolleys will be named after Lowcountry icons. The Comet is named for the Coastal Discovery Museum’s resident marsh tacky, a rare breed of horse brought by the Spanish to South Carolina as a workhorse in the 16th century. The other trolley will be named The Alligator as a tribute to Hilton Head native Charlie Simmons, known as “Mr. Transportation” because he used one of his freight boats — The Alligator — to ferry goods and people on and off the island before the bridges to the mainland were built.

“We are so excited to help write this latest chapter in the rich history of transportation on the Island,” said Mary Lou Franzoni, LRTA’s executive director. “Our hope is that the trolleys will not only be convenient and fun, but also educational, especially for our visitors.”

For more information, go to www.breezetrolley.com.