Now that the project is completed, regional jetliners will start arriving July 5. The larger Embraer 175 jet will replace the familiar sight of the American Airlines Dash 8 Turboprop descending from the island’s blue skies in approach to the airport. The more modern Embraer 175 has 76 seats and is configured for first class and coach. Depending on the model, the Dash 8 carries up to 48 passengers.

American will fly three round trip flights a day between Hilton Head and Charlotte, he said.

For now, the larger American Airlines planes are the only new commercial activity expected at the airport. But there are efforts underway to try to entice other commercial carriers to fly to the island, Rembold said. 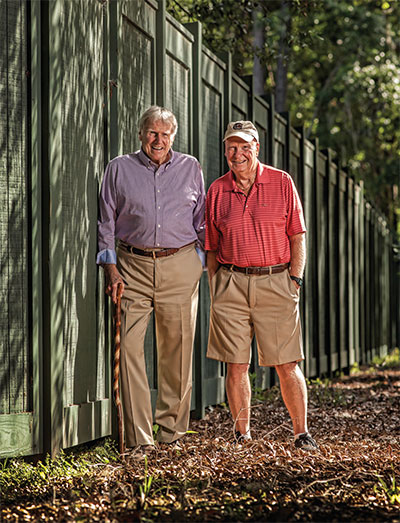 “We are actively working to develop that,” he said. “Hilton Head Island is an easy product to sell. It generates interest right away.”

The $22 million project extended the runway from 4,300 feet to 5,000 feet. The Federal Aviation Administration funded 90 percent of the cost, the South Carolina Aeronautics Commission contributed 5 percent, and the airport provided the remaining 5 percent.

A $7.9 million taxiway, funded in the same way as the runway expansion, was completed in March 2017. That project relocated the original taxiway 100 feet from the runway so the airport could meet current separation standards, Rembold said.

An increase in private jet traffic is also expected because the expanded runway will allow for planes with longer range and bigger payloads, Rembold said.

WE ARE COMFORTABLE WITH WHAT WE HAVE AGREED TO AND WHAT THEY ARE DOING.

Beaufort County and Hilton Head officials approved the airport runway expansion — up to 5,400 feet — in 2010. At that time, residents in nearby communities like Palmetto Hall Plantation to the west of the airport and Port Royal Plantation to the east worried about how a longer runway would impact their quality of life, property values in the area, and affect the surrounding environment.

Palmetto Hall created an airport committee to hold formal discussions with the airport. The two sides signed a memorandum of understanding in December 2015, Rembold said.

That agreement allowed for trees to be removed and trimmed in Palmetto Hall to increase safety for planes flying in and out of the airport. Beaufort County and the Town of Hilton Head Island each paid $500,000 to replant shorter trees and shrubs that serve as a noise barrier along Beach City Road.

“They let us manage the whole project,” said Jim Webb, who heads the airport committee for the Palmetto Hall property owners association. “We could design it and build it. Vegetation and trees are on both side of a plywood wall and are designed to knock down the noises. Above eight feet, you still have the noise.”

Stationed at both the north and south ends of the runway is a safety feature involving material designed to catch a jet if it overruns the space.

“We are comfortable with what we have agreed to and what they are doing,” Webb said.