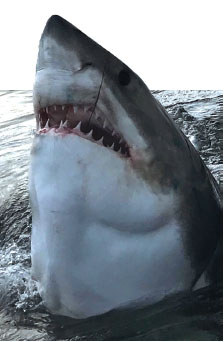 First male white shark I've caught. We put an acoustic tag on him and sent him on his way...Two whites in December isn't bad, but I'm going to get that monster.” Michalove’s crew tags sharks for OCEARCH, a nonprofit research organization focused on white sharks and other large apex predators.