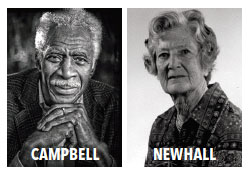 The Rotary Club of Hilton Head Island recently announced that Emory Campbell and Caroline “Beany” Newhall will be inducted into the Hilton Head Island Hall of Fame on Nov. 10. Campbell is being recognized for his outstanding contributions to the cultural and environmental heritage of the Lowcountry.

Throughout his career — first as an environmental health engineer for the Beaufort-Jasper Health Center and then as executive director of the Penn Center on St. Helena’s Island – Campbell worked vigorously to implement public health measure in impoverished rural areas and to preserve and enhance the rich Gullah heritage of the Sea Islands. Newhall (1904-1991) is being honored for her role as an environmentalist in preserving the original island habitat and natural beauty of Hilton Head. She persuaded island developer Charles Fraser to set aside a 50-acre tract of “green space” that became the Audubon Newhall Preserve on Palmetto Bay Road. Later, she was instrumental in development of the Whooping Crane Conservancy in Hilton Head Plantation. The Rotary will host a buffet luncheon and induction ceremony at the Sonesta Resort Hilton Head Island at noon Thursday, Nov. 10, at which time the honorees will be recognized and the plaques presented.