Other towns across the United States have memorials to commemorate those who fought and who died for their country, but there is not one in the town of Bluffton.

That’s about to change.

Next year, Bluffton residents will be able to celebrate Veterans Day at a new memorial currently under construction at Buckwalter Place. 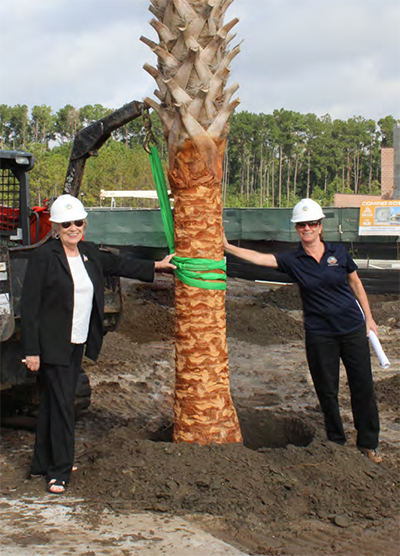 “There was nothing here. Nothing at all,” said Kay Ranta, who, with her fellow members of the American Legion Post 205 Auxiliary, spearheaded the construction of the new memorial. “If you go to any little town across the United States, I don’t care how small they are, they have some sort of memorial. That was my plea. And the town embraced it.”

This wasn’t Ranta’s first memorial fight — in her previous hometown of Fountain Hills, Arizona, the local legion auxiliary also went to bat for a memorial and got one built.

“It’s a family thing,” she said of why she feels so strongly about military memorials. “My grandfather, uncles, brother and husband all served. My husband was an Air Force man. So, it was a patriotic thing, I felt. It became a passion.”

IN MAY, TOWN COUNCIL VOTED TO MOVE FORWARD AND THE GRAND OAKS CONSTRUCTION CO. IS NOW WORKING ON THE SITE.

In March 2017, Ranta went before Bluffton Town Council to request a memorial for the town. The town holds a parade to mark the holiday, but, as Ranta pointed out, there was no place to actually hold a service.

“Town Council agreed that a veterans memorial was warranted to recognize the sacrifice and service of our military veterans,” said Debbie Szpanka, Bluffton’s public information officer. “Many of the town and region’s residents are active or retired military.”

A preliminary plan was approved and various locations considered before the Buckwalter site was selected. In May, Town Council voted to move forward and The Grand Oaks Construction Co. is now working on the site.

Roughly 1.6 acres in size, the memorial site is located at the northeast quadrant of what will eventually be a town park situated across from Evicore. It will include a 3-foot tabby monument with a dedication plaque and 6-foot tabby walls with service seals embedded in them — Army, Navy, Air Force, Marine Corps, Coast Guard and Merchant Marine. 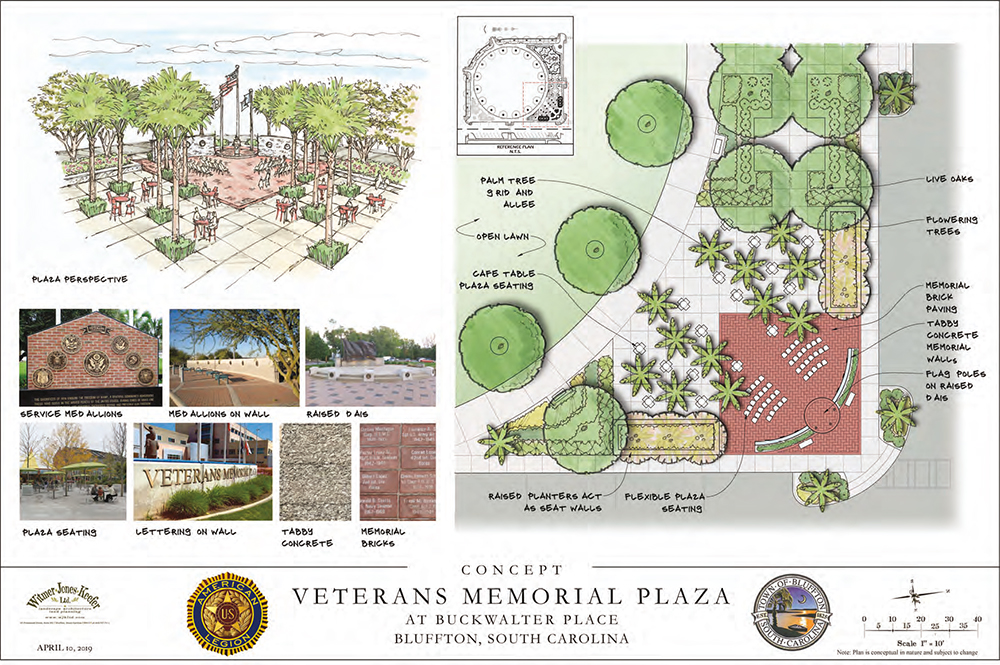 Four flags will fly at the site: an American flag, the South Carolina flag, and flags honoring prisoners of war and those missing in action. Palm trees will be planted at the site, where there will initially be eight patio tables and 32 chairs.

The town of Bluffton is covering much of the costs of the memorial; construction costs expected to be $155,000 and annual upkeep will be approximately $5,000, according to Szpanka.

The auxiliary group is also raising money to cover some of the costs, selling bricks that can be engraved with a dedication. The cost of a brick is $100; the town expects to sell about 6,400 over the course of several years. Ranta said the bricks don’t have to be dedicated to veterans — they’re for “anyone you want to honor.”

Szpanka said the town hopes to complete construction on the memorial by the end of the year.

Bricks are $100, payable by check or credit card. Bricks can be dedicated to anyone. To buy a brick, go to bit.ly/2kKX7Yx; to learn more about the new Veterans Memorial in Bluffton, go to www.alpost205.org/veterans--memorial.html.

The 2019 Bluffton Veterans Parade will begin at 10 a.m. Nov. 11, proceeding up Calhoun Street to Promenade Street and ending at Dr. Mellichamp Drive.

THE TOWN PARK AT BUCKWALTER

In addition to the Veterans Memorial, the new park will include a multipurpose lawn that can be used for events; a playground that will be accessible for those with disabilities; and walkways and benches shaded by live oaks. The park will be completed as funds become available.