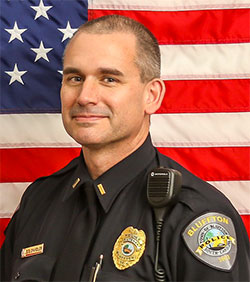 He joined the Bluffton Police Department in 2006 and has nearly 20 years of experience in law enforcement. During his 12 years in the department, he has served as a patrol sergeant, traffic unit sergeant, neighborhood services unit sergeant, investigations lieutenant and patrol lieutenant.

He also is a firearms instructor for the department and commander of the Strategic Response Team. He is a graduate of Liberty University with a master’s degree in criminal justice and public administration. He is also a recent graduate of Northwestern University’s School of Police Staff and Command.

Chandler will serve as interim police chief as the town begins its search for the next chief. The search will be open to both internal and external applicants and is being advertised through state and national outlets.