A place filled with children and families, all running around, laughing, playing: It’s what the “Field of Dreams” at Oscar Frazier Park has been about since the beginning—and now the space is getting an upgrade. Enhancing the playground and bringing other improvements to the park is a fitting way for the Bluffton Rotary Club to mark 30 years of serving the Lowcountry.

The open field and playground area in front of the park’s community center, given to the town of Bluffton by the Rotary Club more than 13 years ago, is slated for a facelift to begin early next year. The Rotary Club hopes the addition of a creative train-themed playground, as well as other planned improvements, will put the park on par with Bluffton’s Dubois Park — creating another destination for family fun in the Old Town area.

The project is part of a partnership by the Rotary Club, the town of Bluffton and the members of the Hilton Head Island-Bluffton Chamber of Commerce Leadership Program. Other planned improvements to the park include a new picnic pavilion with restrooms, a walking trail, an art wall, space for formal events like weddings, a splash pad with fountains, and improved landscaping. The open space in the middle of the field will remain, town officials said. 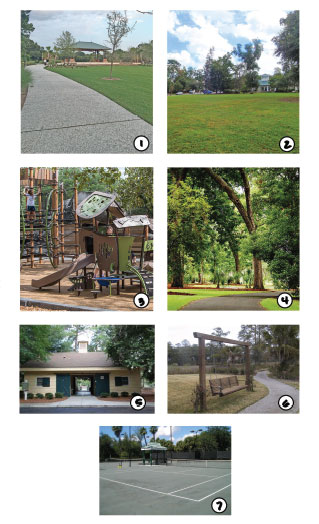 “We are committed to keeping the grand lawn, perfect for its flexible use, as a gathering spot and a space to play informal soccer and pick-up football games,” said John Kirkland, president of the Bluffton Rotary Club.

The Rotary Club turned to local land planning and landscape architecture firm Witmer Jones Keefer for help with a master plan for the park project. The club also held two open forum meetings in October for community review and shared its plans with the Bluffton Park homeowners association for its approval, because the neighborhood surrounds the park.

The playground expansion is phase one of the plan. In honor of the park’s namesake, Bluffton’s former mayor pro-temp and poet laureate Oscar Frazier, a train-themed play structure will be added to the site. Frazier ran a barbecue restaurant in an old caboose. The playground also will get new turf, cooling sand and other equipment.

“We’re excited about the train concept and having a structure to tie into the fabric of the park and our community,” said Frazier’s nephew, Kenneth Frazier, who also is a member of this year’s chamber leadership program. The leadership class has taken on the playground enhancement as their annual project.

Playground construction is expected to begin in 2018 and be completed in the spring, when the capital campaign for the next two phases of park improvements is set to kick off.

The Bluffton Rotary Club has set aside about $45,000 for the initial phases of the project and partnered with Bluffton officials to identify grants that could help pay for the estimated $1 million improvement project. The chamber is also holding fundraisers for the project.