In those heady days before the economic collapse of 2008, it was a phrase you’d read in every newspaper, magazine and real estate pamphlet in town: Bluffton is Booming.

And in those days, it sure felt like it. What could then still be called a sleepy little town was suddenly getting a shiny new downtown Promenade right at the end of Calhoun Street, with shops and restaurants and the promise of plentiful parking (two of those things ultimately came true). We were getting big box stores – a Best Buy, built into its very own plaza, with even more places to eat and things to buy. We were getting a tech park off of Buckwalter, promising an expanded employment base which would bring even more people, which would necessitate more shops and restaurants, and so on and so on.

Blufftonians wondered at the time what would come next amid all this growth. If only they’d known what was coming to Bluffton just on the other side of the recession. 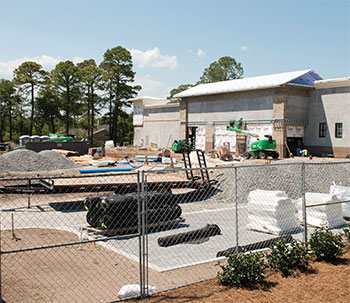 That first boom has nothing on Bluffton’s second boom, which has transformed this small town in just a few years. The much-discussed Hilton Head National development — which would include 400,000 square feet of retail space as well as office space, a convention center and a water park — had collapsed at press time, but it was just part of a massive wave of growth over the last year in Bluffton.

Start with the aforementioned tech park, which evolved over the years into what is now billed as a “commerce park.” Original tenant CareCore, now EviCore, has been joined by a heady mix of retailers including Station 300, Southern Barrel Brewing Company, Ace Hardware, plus offices for the Don Ryan Center for Innovation and a Bluffton Police sub-station. Then just as you thought they were done, in came a flurry of press releases trumpeting a new massive Kroger anchoring an open-air shopping concept to one side.

Build-out has been slow and steady on this multi-county project, with promises ahead for a fully fledged mixed-use town center by year’s end with workforce housing, a public park and what’s being referred to as “donation of commercial space for the Town (of Bluffton) innovation center.”

Closer to Old Town, the intersection of Bluffton Road and S.C. 278 has been the site of two different developments that have had a transformative effect on the town.

The first, and most obvious, is the Walmart Supercenter that now dominates the intersection’s southwest corner. A point of contention even before construction was complete was the building’s massive rear wall, which presented motorists on 278 with a solid wall of gray brick less than 50 feet from the roadway. Adding to this was some unexpected roadwork done during construction which created a median in the entrance to Kittie’s Crossing, across the street. None of this early controversy seemed to scare away shoppers, as both the Walmart and the adjacent Sam’s Club were both packed during their first few days of operation.

Across S.C. 278, another new development brought as much confusion as excitement. A sign originally touting a PGA Superstore, Hobby Lobby and Fresh Market coming soon to a patch of dirt that had been The Greenery was suddenly altered to exclude Fresh Market.

The PGA Superstore has arrived, Hobby Lobby is up next with an estimated opening of Aug. 7, but the fate of a Fresh Market in Bluffton remains up in the air. At press time, no concrete answers had been given to the status of Fresh Market, despite the fact that the building itself appeared to be completed.

And it’s not just new businesses coming from outside the region. Some are coming off-island, like Progressive Technology, which moved out to Bluffton after 16 years on Hilton Head Island. Or Hilton Head Christian Academy, which has not broken ground or applied for permits, but has announced plans to move its school into Bluffton near the Buckwalter Parkway.

By all appearances, what’s happening in Bluffton now is on par with, and in some cases exceeds, the boom that defined the town in the early 2000s, when this one-square-mile river town exploded with the growth of Buckwalter Parkway. What it could mean for the future of Bluffton at this point is anyone’s guess.

But at the risk of wearing out a phrase that is being trotted out once again as this sleepy river town enters another renaissance: Bluffton is Booming.