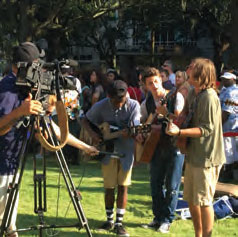 Could the Lowcountry be home to another “American Idol”? Three seasons after St. Helena Island native Candice Glover won the 12th season of the popular reality singing competition, two Bluffton teenagers have advanced to the celebrity judge round of the 15th and final season of the show.

Ben Hughey and Lee Jean, both 15, made it past the fourth round of the competition on July 23 at the Savannah Civic Center. The new season premieres in January. Judges are Jennifer Lopez, Harry Connick Jr. and Keith Urban. Bluffton's Grayson Lentz, 17, also made it far in the auditions but was eliminated in the fourth round. Lentz and Hughey are two of four members of the local rock ‘n’ roll band Native.