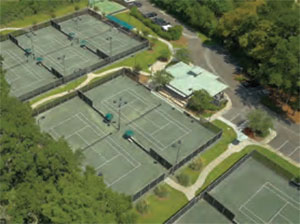 The Moss Creek Tennis Center was the only tennis center in South Carolina to be honored by the United States Tennis Association in its annual Facility Awards Program. Each year, the USTA recognizes facilities throughout the country for meeting increasingly high standards in construction and renovation.

Moss Creek was one of 13 centers nationwide to be honored in 2015 and just one of six private facilities on the list. The center, built in the early 1980s, has undergone continuous upgrades in recent years. It is now wheelchair accessible and "green" focused, and features umbrellas and water fountains at each court. The center expanded its outside viewing deck, office space and storage space for USTA league play. It features seven Har-Tru lighted courts, a practice wall and ball machine. Moss Creek Tennis Center representatives were honored at the USTA's semi-annual meeting Sept. 6 in New York City.